In the Light of You (Paperback) 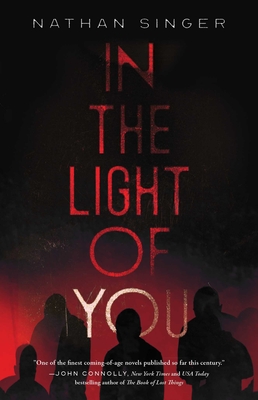 “One of the finest coming-of-age novels published so far this century” (John Connolly, New York Times bestselling author), In the Light of You is a timely and powerful story about the consequences of intolerance and the agonies of being young and disillusioned in a racially divided America.

Angry, disaffected sixteen-year-old Mikal Fanon has just moved out of his poor Kentucky suburb to an even poorer Black neighborhood in Ohio. Feeling like an outsider in a world he perceives to be pitted against him, Mikal joins a gang of Neo-Nazi skinheads for reasons that are not entirely clear to him at first. The gang’s charismatic leader, Richard, takes him under his wing, and Mikal finds himself pulled into the wild, fast-paced, and dangerous lifestyle of the white power underground.

Emboldened by his newfound sense of belonging, Mikal finds himself committing horrible acts of violence without a second thought. But two women threaten to tear his world apart—a passionate Black activist named Niani Shange to whom Mikal is secretly (and desperately) attracted and Sherry Nicolas, Richard’s new girlfriend, whose presence serves to further destabilize an already volatile situation.

These two fundamentally opposite yet eerily similar forces threaten to throw fuel on an already raging fire, promising a bloody and explosive end. But who will survive, and who will be burned?

Nathan Singer is a novelist, playwright, composer, and experimental performing artist. He is also the lead vocalist and guitarist for award-winning band The Whiskey Shambles. His published novels are the controversial and critically acclaimed A Prayer for Dawn, Chasing the Wolf, In the Light of You, The Song in the Squall, Transorbital, and Blackchurch Furnace. He currently lives in Cincinnati, Ohio, where he is working on a multitude of new projects.

“[A] raw, blistering coming-of-age novel … Singer evokes with rare passion the tumultuous confusions and conflicts as teens seek to work out their racial and sexual identities. … Readers will find Mikal's erratic passage through a rough adolescence both vivid and compelling.”
— Publishers Weekly

“In furiously fast-paced prose … Singer vivifies the attraction of the white power movement, drawing both the long, boring stretches spent playing video games and the heated moments of violence, set against a backdrop of sex and metal music . . . Singer’s percussive prose [works] its magic. An unblinking portrait of young white rage.”
— Booklist

"Quite simply, In The Light of You is one of the finest coming-of-age novels published so far this century. Incendiary and moving, deeply relevant and searingly honest, it deserves to catapult Nathan Singer to the top of the list of America's best young novelists."

“With prose brutal as a tumble through barbed wire and a tweaker's furious energy, Nathan Singer has crafted a chilling look inside the White Power movement. A riveting story of hatred, fear, longing, and maybe, just possibly, redemption."

"Haunting, raw, and with an unexpected punch of redemption, Nathan Singer's In the Light of You can leave no one in doubt that he is the heir apparent to Hubert Selby, Jr. Singer's electric prose is impossible to walk away from and will stay with you long after you've finished the last page."

— Tasha Alexander, New York Times bestselling author of And Only to Deceive

“Raw and beautiful … The world Singer creates is seamlessly authentic, and Mikal is the kind of complicated, flawed, and completely compelling character that very few writers could pull off. Singer’s prose is as stark and brutal as the world he describes, but it’s also riveting. … it carries the kind of redemptive power that reminds us why we read novels in the first place.”

"Visceral ... one of those rare novels that works on numerous levels, and in addition to succeeding as a cautionary tale about intolerance and discrimination, it's also a chilling exploration into the psyche of those involved in America's racist underground, as well as an acerbic commentary on the overall depraved state of the planet's (allegedly) most advanced species. Blending the gratuitous violence of A Clockwork Orange and rhetoric of Adolf Hitler's Mein Kampf with a surreal sense of naiveté à la The Catcher in the Rye, Singer brilliantly utilizes contradictions to intensify thematic points in this savage and darkly poetic tale. Ultimately, though, under all the shaved heads and swastika-tattooed flesh, In the Light of You is a story of redemption and the hope that it's never too late to change: a person, a group, a community, or a civilization."

“I used to think American History X was hardcore, that it pushed the envelope and was a really brave story about what hatred can do to you. Then I read Nathan Singer’s masterpiece In The Light of You. Now American History X is like a Disney flick to me.”

“A brutal, unflinching look at America's racist subculture, replete with sex, violence, and jagged-edged punk rock. Nathan Singer does more than narrate the story of the rootless, disaffected kids drawn into the hate: he lets you hear the siren song that lures them to their doom.”