Every Star a Song (The Ascendance Series #2) (Paperback) 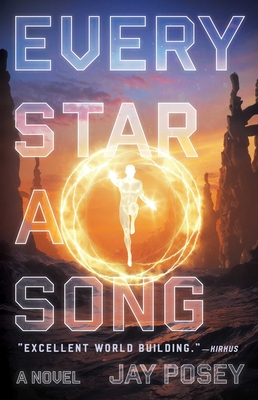 Jay Posey returns with the much-anticipated second installment of the critically acclaimed Ascendance series following a powerful woman who can destroy planets with a single word but who is suddenly faced with an adversary that threatens the entire universe.

Far in the future, human beings have seeded themselves amongst the stars. Since decoding the language of the universe 8,000 years ago, they have reached the very edges of their known galaxy and built a near-utopia across thousands of worlds, united and ruled by a powerful organization known as the Ascendance. The peaceful stability of their society relies solely on their use of this Deep Language of the cosmos.

Elyth—a former agent of the religious arm of the Ascendance, The First House—is on the run after the events of Every Sky a Grave, when she and the fugitive Varen Fedic exposed the darker side of Ascendance hegemony on a planet called Qel. Though she just wishes to put the past (and Varen) behind her, she is soon tracked and cornered by the Ascendance agents. Surprisingly, they aren’t there for punishment. Instead, they offer her a deal in exchange for her help in exploring a new planet that seems to have appeared out of nowhere. If she agrees, her sins against the Ascendance and the First House will be forgiven.

Elyth reluctantly agrees to join the team of elite agents (including some former allies-turned-enemies) but almost as soon as they touch down on the planet’s surface, things start to go awry. Strange sounds are heard in the wilderness, horrifying creatures are seen stalking the forests, and even the landscape itself seems to change during the night.

But as expedition members start dying, two things become clear: the planet is conscious, and it’s trying to kill them.

Jay Posey is the author of the Legends of the Duskwalker trilogy and the Outriders series. He’s also spent fifteen years with Ubisoft/Red Storm Entertainment, contributing as a writer and game designer to a variety of projects, ranging from Tom Clancy’s award-winning Ghost Recon and Rainbow Six franchises to the virtual reality game Star Trek: Bridge Crew. Jay currently resides in Durham, North Carolina.