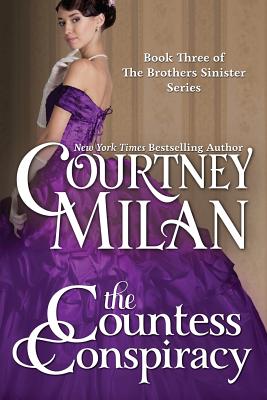 Sebastian Malheur is the most dangerous sort of rake: an educated one. When he's not scandalizing ladies in the bedchamber, he's outraging proper society with his scientific theories. He's desired, reviled, acclaimed, and despised-and he laughs through it all. Violet Waterfield, the widowed Countess of Cambury, on the other hand, is entirely respectable, and she'd like to stay that way. But Violet has a secret that is beyond ruinous, one that ties her irrevocably to England's most infamous scoundrel: Sebastian's theories aren't his. They're hers. So when Sebastian threatens to dissolve their years-long conspiracy, she'll do anything to save their partnership...even if it means opening her vulnerable heart to the rake who could destroy it for good. The books in the Brothers Sinister series: 1/2. The Governess Affair (prequel novella) 1. The Duchess War 11/2. A Kiss for Midwinter (a companion novella to The Duchess War) 2. The Heiress Effect 3. The Countess Conspiracy Coming soon: 4. The Mistress Rebellion 41/2. Talk Sweetly to Me.

Courtney Milan's debut novel was published in 2010. Since then, her books have received starred reviews in Publishers Weekly and Booklist. She's been a New York Times and a USA Today Bestseller, a RITA(R) finalist and an RT Reviewer's Choice nominee for Best First Historical Romance. Her second book was chosen as a Publishers Weekly Best Book of 2010. Courtney lives in the Rocky Mountains with her husband, a marginally-trained dog, and an attack cat.