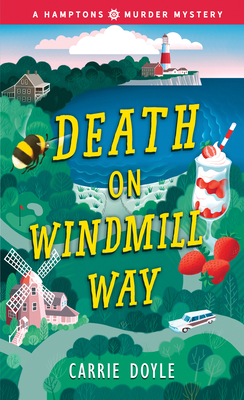 First book in the Hamptons Murder Mysteries cozy series Antonia's looking for some peace and quiet... too bad she moved to the Hamptons

The Hamptons are known for beautiful beaches, luxurious living, millionaire mansions, and now...murder Antonia Bingham, a renowned chef and the new owner of East Hampton's Windmill Inn, escaped to the Hamptons to get away from a harrowing past. Yet she finds herself in more danger than ever when she learns about a curse that haunts the inn--all previous owners have died suspiciously.

When she's not cooking sumptuous meals for her guests Antonia digs into the investigation to uncover who's behind the curse. Could the culprit be a guest at the inn, or is there a killer on the road? And the closer she gets to the truth, the closer she gets to being the next victim--will she solve the case in time to save herself?

This highly anticipated new cozy mystery release is full of superb dinners, walks on the beach, and baffling clues.

Carrie Doyle Karasyov lives with her husband and sons in New York City and East Hampton, NY. A fan of mystery and crime novels, a cooking enthusiast, a former employee of Food Network star Ina Garten's at the Barefoot Contessa store, and a generally nosy person, Carrie combined all of her interests to create Antonia Bingham, the foodie innkeeper and reluctant detective character who stars in the Hamptons Murder Mystery series. Carrie is the bestselling author of six novels (written as Carrie Karasyov, five of them with Odd Mom Out's Jill Kargman), and five optioned screenplays (one of which was produced and screened at the Sundance festival), as well as a Contributing Editor to Hamptons magazine. The founding editor of Marie Claire magazine's Russian edition, as well as a former editor at Harper's Bazaar magazine and Harper's Bazaar Russia, Carrie is currently developing an animated comedy series she has co-written with her 15- and 13-year-old sons. Visit Carrie's author site at www.carriekarasyov.com for news on the next installment of the Hamptons Murder Mystery series.