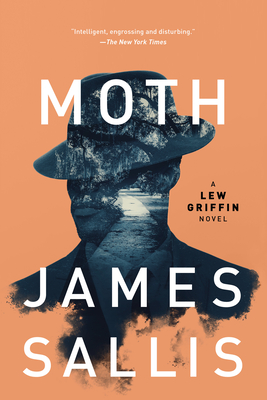 Lew Griffin, now fifty years old, has abandoned his former career as a New Orleans private investigator for the safety of teaching. But his old life draws him back.

One of the very few lights from Lew Griffin’s dark and violent past has flickered out. His one-time lover, LaVerne Adams, is dead—and her daughter, Alouette, has vanished into a seamy, dead-end world of users and abusers, leaving behind a critically fragile premature infant daughter. Griffin is determined to keep his distance from the dangers of the New Orleans night. But his inescapable obligation to an old friend keeps bringing him back like a moth to a flame.

James Sallis has published eighteen novels, including Drive, which was made into a now-iconic film; Sarah Jane; and the six-volume Lew Griffin series. He is a recipient of the Hammett Prize for literary excellence in crime fiction, the Grand Prix de Littérature Policière, the Deutsche Krimipreis, and the Brigada 21 in Spain, as well as Bouchercon’s Lifetime Achievement Award. His biography of Chester Himes was a New York Times Notable Book of the Year, and he has been shortlisted for the Anthony, Nebula, Edgar, Shamus, and Gold Dagger Awards.

“There is danger, violence, suspense; there are characters so vivid as to be documentaries in miniature and milieus as perceived by all the senses . . . The reader has to hope the remarkable biography of Lew Griffin will continue.”
—Los Angeles Times

Praise for the Lew Griffin Novels

“One of the most inventive and affecting sagas in recent crime fiction. Lew Griffin is an African-American private detective in New Orleans (and a poet and teacher) who specializes in finding missing persons. Griffin’s moral intelligence and questioning mind fold a noir perspective into post-existential angst. And of course there’s New Orleans, full of dangerous mirage.”
—Tom Nolan, The Wall Street Journal

“Beautifully captures the struggle between despair and hope within Griffin’s soul, and the piquant savor of a curiosity that—like New Orleans itself—refuses to die.”
—The Seattle Times

“Poetic, complex and multidimensional, James Sallis's crime novels about New Orleans detective Lew Griffin . . . are unlike any you are likely to crack open.”
—Los Angeles Times

“Sallis is a sure hand—characters and prose, of course, dialogue, too, but he is also a subtle weaver of plot, with the perfect level of push. His descriptions evoke a place that seems to fully exist just around the corner, and his people speak and sweat and live and die and it's all a great pleasure.”
—Daniel Woodrell, author of Winter’s Bone

“James Sallis is doing some of the most interesting and provocative work in the field of private eye fiction. His New Orleans is richly atmospheric and darker than noir.”
—Lawrence Block

“One of the most enjoyable and most important writers working today, James Sallis has quietly revolutionized an entire genre of literature. If you don't ordinarily read crime fiction, you will love these books. If you do read crime fiction, you will never look at it the same after meeting Lew Griffin.”
—Sara Gran, author of the Claire DeWitt novels

“James Sallis breathes new life into the wheezing detective genre with Lew Griffin, a black resident of the seamier side of New Orleans . . . Griffin is an original creation, a loner who, in the classic private eye tradition, does things his own way, in his own time.”
—San Francisco Chronicle & Examiner