A Scoundrel of Her Own (The Sinful Wallflowers #3) (Mass Market) 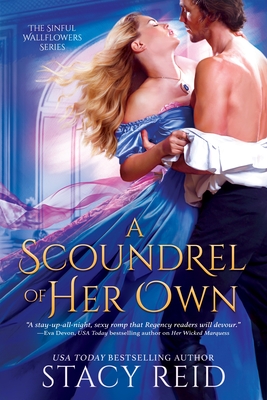 Lady Ophelia Darby exists in two worlds. In one, she is the impudent, willful daughter of a powerful marquess and darling of the ton. In the other, she moves through the underworld’s shadows as songstress Lady Starlight, protected only by the notoriously wealthy scoundrel Devlin Byrne. But when she stumbles upon her beloved father’s darkest secrets, the line between her two worlds quickly blurs. Now she needs the help of the one man a lady should never trust.

Devlin Byrne stands on the edge of London society, knowing he will never be accepted. No one else knows that his obscene wealth and ruthlessness aren’t without purpose. Or that his purpose has golden-brown eyes that shimmer with mischief, the palest of skin, and a lush mouth that beckons to be kissed, and deeply. But having Ophelia is only the beginning of Devlin’s plans.

It’s undeniable that Devlin Byrne is a dangerous temptation—but just as Ophelia begins to trust him, maybe even fall for him, she discovers she’s not the only one with secrets. And his would lead her down more than just the path of scandal…

Each book in the Sinful Wallflowers series is STANDALONE:
* My Darling Duke
* Her Wicked Marquess
* A Scoundrel of Her Own

Stacy is an avid reader of novels with a deep passion for writing. She especially loves romance and adores writing about people falling in love. Stacy lives a lot in the worlds she creates and actively speaks to her characters (out loud). She has a warrior way, never give up on her dreams. When Stacy is not writing, she spends a copious amount of time watching Japanese anime and playing video games with her love, Du’Sean Nelson. stacyreid.com