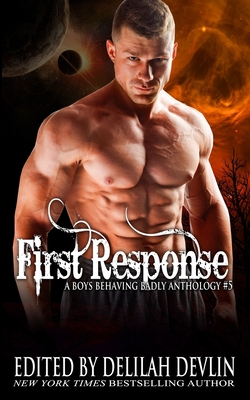 First Response: A Boys Behaving Badly Anthology includes the following stories: Far from Over by Reina Torres - They missed their chance at the academy, but after she rescues him from a pile of rubble, a fireman decides it's time to make her burn for himSheltering Charlotte by Elle James- Passions ignite between a cop and a city girl trapped in a cellar while a storm ravages Hellfire, TexasThe Siren's Song by Ava Cuvay - A spaceport firefighter walks into a bar...and straight into arms of the sassy owner, igniting flames faster than plasma fuelClaiming Lyla by Megan Ryder - A she-wolf being hunted by pack males during a claiming rite is rescued by a rogue alpha determined to make her his own, despite her desire to be independentOver the Edge by N.J. Walters - After a bear leaves a corporate lawyer stranded on a cliff ledge, rescue comes from her estranged husbandFire in the Storm by Payton Harlie - An unexpected hurricane can't put out the fire between a female ex-Marine and a handsome firefighter when they're stranded on an isolated islandSave Me Twice by Jaap Boekestein - Playing with handcuffs leads to unexpected and sexy consequences for a timid office worker when she loses the keySaving Time by Kimberly Dean - When a scientist working on cracking the mystery of time travel falls through a wormhole, a Time Enforcer rushes to save herFalling Off the Single Track by Tray Ellis - Falling head-over-handlebars wasn't great for a single-girl weekend warrior, but falling head-over-heels with her mountain biker rescuer put romance on the right track Blackout by January George - When a summer heatwave blackout strands a fireman in an elevator with the girl who got away, the temperature isn't the only thing risingDrive by M. Jayne - A Lycan on the run from assassins from her own pack must rely on a stranger to surviveHandcuffs and G-Strings by Margay Leah Justice - At a benefit for fallen heroes, sparks fly between a socially awkward woman and the cop she mistakes for a stripperThe $5 Kiss of Life by Michal Scott - Trapped by the small-town conventions imposed on her, a pastor's spinster daughter finds rescue in the town bad boy's very public kissCrossing the Line by A.C. Dawn - After an intense call, a fire captain finally crosses the line with a sexy medic he's burned for since the moment he first saw herIn the Wild by Delilah Devlin - After a charging bison comes between her and her latest skip, a bounty hunter must rely on the survival skills of her park ranger rescue.