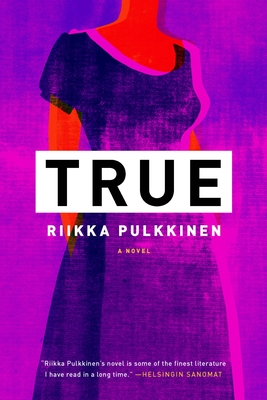 Elsa is dying. Her husband, Martti, and daughter Eleonoora are struggling to accept the crushing thought that they are soon to lose her. As Elsa becomes ever more fragile, Eleonoora’s childhood memories are slipping away. Meanwhile, Eleonoora’s daughter Anna spends her time pondering the fates of passersby. For her the world is full of stories. But the story that will change her forever is the one about Eeva, her mother’s nanny, whom her grandparents have been silent about for years. Eeva’s forgotten story, which Anna first learns of when she discovers an old dress of Eeva’s, is finally revealed layer by layer. The tale that unfolds is about a mother and daughter, about how memory can deceive us—and sometimes that is the most merciful thing that can happen.

Riikka Pulkkinen studied literature and philosophy at the University of Helsinki. Her debut novel, The Border, sparked international interest when it was published in 2006. Her second novel, True, will mark her English debut. Riikka Pulkkinen received the Kaarle Prize in February 2007 and the Laila Hirvisaari Prize in May 2007.

Lola M. Rogers is a freelance translator of Finnish literature living in Seattle. Her published translations include selected poems of Eeva Liisa Manner in the anthology Female Voices of the North, published by Praesens of Vienna; the graphic novel The Sands of Sarasvati, based on Risto Isomäki’s novel of the same name, translated with Owen Witesman for Tammi of Helsinki; and Purge, by Sofi Oksanen, for Grove/Atlantic.

“Pulkkinen spins variations of [the] theme of transformative identity, having characters periodically relate to one another as if they were improv artists” –New York Times Book Review

“Secrets, long hidden, are revealed through alternating voices from her family's present and past in this poignant work of fiction.” –Barnes & Nobel Book Review