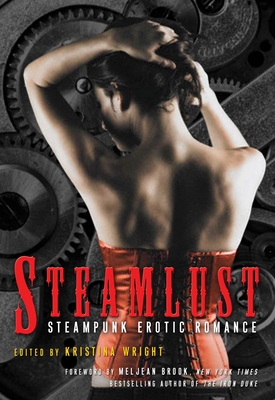 "The stories in Steamlust are all well-written with characters you want to invest in, even if it is only for 20 pages. On a few I even found myself wishing it wasn’t over. If you’ve never read steampunk before, don’t skip the editor’s note. It’s a great explanation of steampunk and how it got its roots in literature."
San Francisco Book Review

"One does not need to be a fan of steam punk in order to understand or enjoy this delightful book. I am eagerly anticipating the next book in the series."
Night Owl Reviews

"The collection blends elements of science fiction, history and fantasy in all time periods and throws in lashings of heady, hot, steamy sex - just the way we like it!"
JADE Book Reviews

"Wright’s anthology of sizzling steampunk romance is a sensual, passionate, and humorous collection of alternate histories, fantastical worlds, and time travel romps. The heroines are strong-willed, intelligent, technologically savvy, and elegant in their fashionable corsets. Some are attracted to men who are half-machine, as in Sylvia Day’s Iron Hard,” Christine d’Abo’s The Undeciphered Heart,” and Nikki Magennis’s Make Your Own Miracles.” Others are seduced by the wonders of flying airships and robots in Saskia Walker’s Heart of the Daedalus” and Sacchi Green’s Fog, Flight and Moonlight.” There are same-sex affairs aplenty; the best is Anya Richards’s powerful Rescue My Heart.” Not content to titillate, these passionate vignettes will also satisfy steampunk fans intellectually with nuanced discussions of self-sufficient women and the roles that machines play in our lives. (Nov.)
Publisher's Weekly, Starred Reviewed on: 09/12/2011

"What do dirigibles, steam engines, corsets, gears, romance, sex, and love have in common? You can find them all in the new anthology, Steamlust: Steampunk Erotic Romance. Kristina Wright, the editor, is also an author and steampunk fan. If you’re not sure what it Steampunk” is, start with H.G. Welles and Jules Verne as a reference, with a retro-technological bent. Kristina Wright’s anthology adds romance and erotica to the mix, it is what makes this anthology different in a time when this genre is rising in popularity. Wright invited 14 fascinating women to write short stories centered on female characters who enjoy explorations, Victorian costumes, and romance. The protagonists range from human to automaton, and are as unique as their creators. Because these are short stories, the authors have made every word count and the details are vivid. Erotica fans are sure to find many arousing scenes in the collection. The erotica ranges from flirty to steamy. Adults are invited to visit steamlustanimation.blogspot.com to view a creative video that highlights these stories. Be prepared for a wild and romantic adventure."
Elizabeth Franklin, Portland Book Review

"As always, all of the writing in this anthology is great. There were a couple stories that I wasn’t fond of, but a lot of the stories were really good. I found myself more attached to the relationship between the main character rather than the sexual aspect though; the relationships and romance of the characters seemed to be the focus (as the title would imply), and that’s where I found myself usually drawn into the story. Each story is longer than your average anthology story as well, so you really get the time to get to know the characters and fall in love with their plot."
Fresh Fiction

"... a joy to read, and it’s well-written and contains a great variety of stories."


"This is steampunk . . . written extra hot, for double the steam."
Meljean Brooks

"Kristina is a phenomenal writer... she has the enviable ability to tell a story and simultaneously excite her readers." Erotica Readers and Writers Association

"Kristina Wright knows how to spin a yarn that keeps the reader captivated." Coffee Time Romance

"Kristina Wright is a gifted writer...[who] shows her talents to tell a powerful story with deft subtlety." Erotica Readers and Writers Association

"A budding force to be reckoned with." The Romance Reader

"She shows how sexy the simple exchange of words can be when in the hands of an accomplished author." Erotica Readers and Writers Association