A Night with a Rogue: 2-in-1 Edition with Beauty and the Spy and Ways to be Wicked (Mass Market) 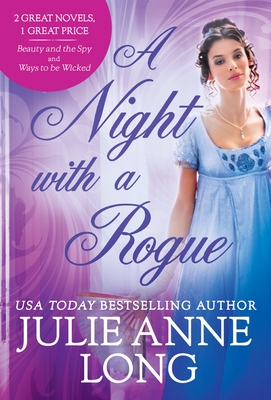 From the elegant halls of the Paris ballet to a sleepy country village, these stunning, sensual historical romances are guaranteed to bring your wildest fantasies to life.

Ways to be Wicked
Sylvie Lamoureux is the darling of the Paris ballet. But a chance to find her lost family sends her fleeing across the English Channel—and into the arms of the notorious Tom Shaughnessy. Sylvie knows better than to fall for Tom’s charming face, yet when a twist of fate places her in his bawdy world of theater, desire grows between them . . . until Sylvie’s secret past forces her to make a decision. Will she bring down the curtain on their fiery pas de deux . . . or trust this wicked man with her heart?

Beauty and the Spy
The sleepy village of Barnstable is the last place where London darling Susannah Makepeace expected to be stuck. But after tragedy forces her into exile, Susannah finds herself in all manner of unexpected situations . . . including stumbling upon a handsome man swimming naked in a pond! But Viscount Kit Whitelaw is not the dissolute rake he appears. For when odd accidents endanger Susannah, who better than the best spy in His Majesty’s secret service to unravel the secrets threatening her?

USA Today bestselling author Julie Anne Long originally set out to be a rock star when she grew up (and she has the guitars and fringed clothing stuffed in the back of her closet to prove it), but writing was always her first love. Since hanging up her guitar for the computer keyboard, Julie has penned books that frequently top reader and critic polls and have been nominated for numerous awards, including the RITA®, Romantic Times Reviewer's Choice, and the Quill, and reviewers have been known to use words like "dazzling," "brilliant," and "impossible to put down" when describing them. Julie lives in Northern California.