How to Marry Keanu Reeves in 90 Days (Paperback) 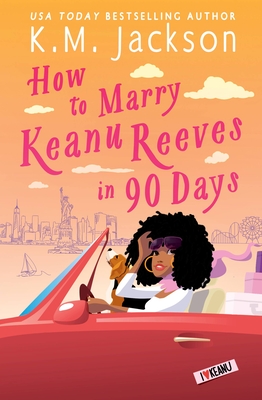 USA Today bestselling author K.M. Jackson delivers a hilarious road-trip rom-com perfect for fans of Meet Cute and When Harry Met Sally. Bethany Lu Carlisle is devastated when the tabloids report actor Keanu Reeves is about to tie the knot. What?! How could the world's perfect boyfriend and forever bachelor, Keanu not realize that making a move like this could potentially be devastating to the equilibrium of...well...everything! Not to mention, he's never come face to face with the person who could potentially be his true soulmate—her.

Desperate to convince Keanu to call off the wedding, Lu and her ride-or-die BFF Truman Erikson take a wild road trip to search for the elusive Keanu so that Lu can fulfill her dream of meeting her forever crush and confess her undying love. From New York to Los Angeles, Lu and True get into all sorts of sticky situations. Will Lu be able to find Keanu and convince him she's the one for him? Or maybe she'll discover true love has been by her side all along...

A native New Yorker, K.M. Jackson who also writes as Kwana Jackson spent her formative years on the ‘A’ train where she had two dreams: 1) to be a fashion designer and 2) to be a writer. After spending over ten years designing women’s sportswear for various fashion houses this self-proclaimed former fashionista, took the leap of faith and decided to pursue her other dream of being a writer.

A longtime advocate for diversity and equality, she is a mother of now young adult twins. Kwana currently lives in a suburb of New York with her husband. You can find her online at www.kmjackson.com.

"It would be enough if Jackson’s latest were simply a charming rom-com replete with laugh-out-loud one liners and pop-culture references, but it’s also a moving, heartfelt story about coping with grief, stress, and major life changes. It doesn’t hurt that Bethany Lu Carlisle, an endearing 40-something Keanu Reeves fangirl, and her best friend, True Erickson, are the kind of characters one can’t help but root for. ...The rom-com trappings keep things lighthearted and welcoming even as Jackson probes heavy emotions. Readers will be wowed." —Publishers Weekly, starred review

“An over-the-top romp with a complicated heroine and great banter.”—Booklist

"Hilarious and heartwarming. K.M. Jackson strikes the perfect balance of comedy, friendship, and romance in this addictingly entertaining tale."

"With a ton of laughs, lots of love, and just the right amount of Keanu-magic, this gem of a rom com packs an emotional wallop, too. With one of my favorite HEAs ever, I loved this book from start to finish!"—Farah Heron, author of Accidentally Engaged

"Witty and heartfelt, with characters that feel like old friends, How to Marry Keanu Reeves in 90 Days is a delightful read. Kwana has gifted us with a rom-com in its purest form."—Xio Axelrod, USA Today bestselling author of The Girl with Stars in Her Eyes