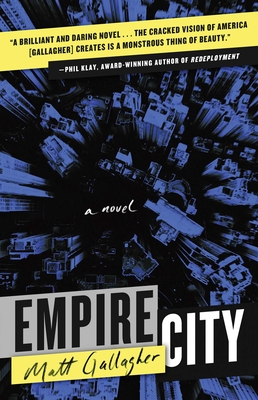 From the author of Youngblood comes a “brilliant and daring” (Phil Klay, award-winning author of Redeployment) novel following a group of super-powered soldiers and civilians as they navigate an imperial America on the precipice of a major upheaval—for fans of The Fortress of Solitude and The Plot Against America.

Thirty years after its great triumph in Vietnam, the United States has again become mired in an endless foreign war overseas. Stories of super soldiers known as the Volunteers tuck in little American boys and girls every night. Yet domestic politics are aflame—an ex-military watchdog group clashes with police while radical terrorists threaten to expose government experiments within the veteran rehabilitation colonies.

Halfway between war and peace, the Volunteers find themselves waiting for orders in the vast American city-state, Empire City. There they encounter a small group of civilians who know the truth about their powers, including Sebastian Rios, a young bureaucrat wrestling with survivor guilt, and Mia Tucker, a wounded army pilot-turned-Wall Street banker. Meanwhile, Jean-Jacques Saint-Preux, a Haitian American Volunteer from the International Legion, decides he’ll do whatever it takes to return to the front lines.

Through it all, a controversial retired general emerges as a frontrunner in the presidential campaign, promising to save the country from itself. Her election would mean unprecedented military control over the country, with promises of security and stability—but at what cost?

“A passionate, scary, wise, and perhaps even prophetic novel” (Tim O’Brien, author of The Things They Carried), Empire City is a rousing vision of an alternate—yet all too familiar—America on the brink written by a “preeminent voice in American writing” (Sara Novic, author of Girl at War).

Matt Gallagher is a Wake Forest graduate and US Army veteran. He’s the author of the novels Youngblood and the memoir Kaboom: Embracing the Suck in a Savage Little War. He holds an MFA in fiction from Columbia and has written for The New York Times, The Atlantic, Esquire, and The Paris Review. He lives with his wife and son in Brooklyn.

"While [Gallagher's] nonfiction was visceral, immediate and reportorial, his fiction transforms direct experience into something more layered and complex. Gallagher’s voice is vital, literary and sometimes lyrical...smart, fierce and important." —The Washington Post

“A timely and moving story of the realities and psychological consequences of war.” —Harper's Bazaar

"[Gallagher] writes about war like you've never read before ... in its emotional nuance, Youngblood codifies the fact that this is a voice to be reckoned with." —Esquire

“A complex tale about the Iraq War, intrigue, love, and survival. Gallagher follows up on his successful first book, the memoir Kaboom: Embracing the Suck in a Savage Little War (2010), with a smart Iraq War novel that adds something new to the genre—new genres. Gallagher subtly weaves throughout this excellent, brutal tale intrigue, a mystery, and two compelling love stories… A fresh twist on the Iraq War novel adds depth to this burgeoning genre.” —Kirkus, starred review

"Empire City is a passionate, scary, wise, and perhaps even prophetic novel, one that can be appreciated on numerous levels. Set in an alternate world in which the U.S. has emerged triumphant from the Vietnam War, this book has the feel of a powerful admonition and warning, but it also has the dislocating, heart-thumping feel of a nightmare. Matt Gallagher has populated his story with characters undergoing ferocious moral struggles in response to an America teetering on the edge of cataclysm." —Tim O’Brien, award-winning author of The Things They Carried

“Empire City is a dark, nimble book that pulls no punches. While the novel tracks an alternate historical reality, time and again I found myself taken aback at just how prescient and applicable its insight is to our very real present. Gallagher once again establishes himself as a preeminent voice in American writing.” —Sara Novic, award-winning author of Girl at War

"Part political thriller, part satire, part fevered reflection of a deeply troubled American culture, Matt Gallagher's Empire City is a brilliant and daring novel. Gallagher's prose is sharp, energetic and witty, his characters are fiercely alive, and the cracked vision of America he creates is a monstrous thing of beauty." —Phil Klay, award-winning author of Redeployment

“A keen extrapolation of a country launched down a radically altered historical continuum . . . An admirable diversion into alternative history and humanity’s inherent nature that plays to the author’s strengths.” —Kirkus Reviews