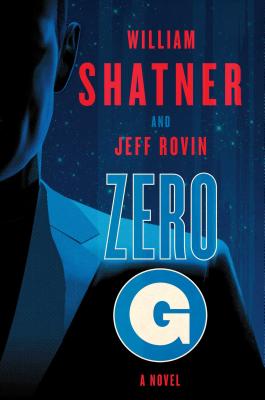 A new science fiction adventure from William Shatner—famous for his role as Captain Kirk on Star Trek—about the intrepid, eighty-year-old FBI deputy director Samuel Lord and his quest to stop the Chinese from using a weapon that, unknown to them, could destroy the earth.

In the year 2050, the United States sends the FBI to govern its space station, the Empyrean. Under the command of former fighter pilot and FBI field agent Samuel Lord, the space based “Zero-G” men are in charge of investigating terrorism, crime, corruption, and espionage beyond the Earth’s atmosphere and of keeping an eye on the rival Chinese and Russian stations.

During the Zero-G team’s first days in space, a mysterious and beautiful scientist, Dr. May, shows up to the Empyrean claiming that important research has been stolen from her lab on the moon. Her arrival suspiciously coincides with timing of a tsunami that destroys part of the coast of Japan, and her unusual behavior makes Director Lord think that Dr. May might know more about the disaster than she’s letting on. Meanwhile, the Chinese space station has gone mysteriously silent.

In this gripping space adventure, Director Lord must connect the dots to discover who or what has caused the tsunami as well as subsequent disasters, and how Dr. May and the Chinese might be involved.

William Shatner is the author of nine Star Trek ® novels, including the New York Times bestsellers The Ashes of Eden and The Return. He is also the author of several nonfiction books, including Get a Life! and I’m Working on That. In addition to his role as Captain James T. Kirk, he stars as Denny Crane in the hit television series from David E. Kelley, Boston Legal—a role for which he has won two Emmy Awards and a Golden Globe. Find more information at WilliamShatner.com.

Jeff Rovin is the author of more than one-hundred books, fiction and nonfiction, both under his own name, under various pseudonyms, or as a ghostwriter, including numerous New York Times bestsellers. He has written over a dozen Op-Center novels for the late Tom Clancy. Rovin has also written for television and has had numerous celebrity interviews published in magazines under his byline. He is a member of the Author’s Guild, the Science Fiction Writers of America, and the Horror Writers of America, among others.