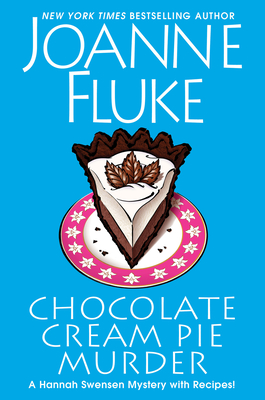 Not even Lake Eden’s nosiest residents suspected Hannah Swensen would go from idealistic newlywed to betrayed wife in a matter of weeks. But as a deadly mystery unfolds in town, the proof is in the pudding . . .

When The Cookie Jar becomes the setting of a star-studded TV special about movies filmed in Minnesota, Hannah hopes to shine the spotlight on her bakery—not the unsavory scandal swirling around her personal life. But that’s practically impossible with a disturbing visit from the shifty character she once believed was her one and only love, a group of bodyguards following her every move, and a murder victim in her bedroom. Now, swapping the crime scene in her condo for her mother Delores’s penthouse, Hannah and an old flame team up to solve a case that’s messier than an upended chocolate cream pie. As suspects emerge and secrets hit close to home, Hannah must serve a hefty helping of justice to an unnamed killer prowling around Lake Eden . . . before someone takes a slice out of her!

JOANNE FLUKE is the New York Times bestselling author of the Hannah Swensen mysteries, which include Double Fudge Brownie Murder, Blackberry Pie Murder, Cinnamon Roll Murder, and the book that started it all, Chocolate Chip Cookie Murder. That first installment in the series premiered as Murder, She Baked:  A Chocolate Chip Cookie Mystery on the Hallmark Movies & Mysteries Channel. Like Hannah Swensen, Joanne Fluke was born and raised in a small town in rural Minnesota, but now lives in Southern California. Please visit her online at www.JoanneFluke.com.

“Chocolate Cream Pie Murder will make your heart stir with compassion, your mouth water with its menu descriptions, and will keep your hands busy as you pull out your own ingredients and sample a treat or two as described in the book.”
—Food Channel