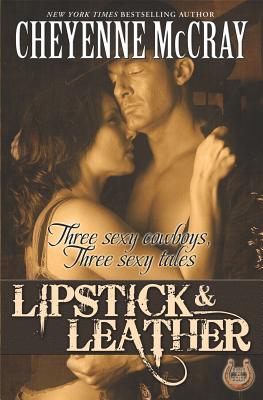 Three short sexy stories of mouth-watering cowboys and the women who lasso their hearts. Cowboy Up Anna Landon doesn't do long distance relationships and she doesn't do cowboys. But when Mike McDaniel comes to her rescue again and again and again, she finds herself attracted to the tall, sexy cowboy more than she ever imagined. Mike finds Anna intriguing. She's nothing like the buckle bunnies who want nothing more than to snag a world champion bull rider. He doesn't get into groupies and Anna is anything but. She's a whole lot of woman rolled up into one sexy package. Anna learns that Mike competes on the rodeo circuit and she knows that's not for her. She doesn't want a man who will be traveling so much, much less a bull rider who competes in one of the world's most dangerous sports. Her heart couldn't take it. Mike knows he has some convincing to do but he's determined to make Anna his own. Rough Rider Brianna Wilson knows a thing or two about business after running a successful Boston boutique. When she inherits her estranged father's ranch she has some ideas of her own to get the failing ranch back in the black, and dives in with plan in hand. Joe Carter never believed he could fall for a woman so fast until he finds Brianna sprawled out in a mud puddle. Problem is she comes charging into her role as boss, making decisions that could end up with every ranch hand quitting. Brianna and Joe butt heads but she soon comes to realize there's no controlling an Alpha male cowboy like Joe. She might be the boss, but in the bedroom he's the one with the control. Brianna has a lot to learn and Joe makes one great teacher. Back in the Saddle Susan Fairfield's return from Dallas to the family ranch in Arizona is bittersweet. It's been nine years since she'd fallen in love with Gray Reardon, when her dreams of happily ever afters had been crushed to dust. Seeing Susan again stuns Gray. He'd fallen for her hard but she'd left without one word that would explain why she wouldn't see him anymore. She'd broken his heart and he's not about to go through that hell again. But when Gray learns the truth, he's determined that nothing come hell or high water will keep them part. Even when Susan insists that she has to go back to Dallas to run her family business, this time he's not about to let her out of his life.

Cheyenne grew up on a ranch in southeastern Arizona. She has been writing ever since she can remember, back to her kindergarten days when she penned her first poem. She always knew one day she would write novels, hoping her readers would get lost in the worlds she created, just as she experienced when she read some of her favorite books. Chey has three sons, two dogs, and is an Arizona native who loves the desert, the sunshine, and the beautiful sunsets.