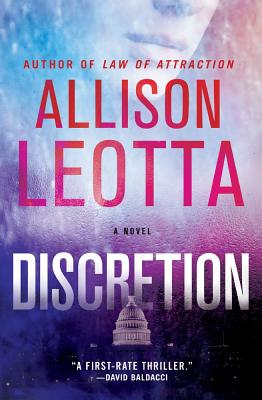 For fans of Lisa Scottoline and Law and Order: SVU, former federal sex-crimes prosecutor Allison Leotta’s novel explores the intersection of sex and power as Anna Curtis investigates the murder of one of DC’s highest-paid escorts.

When a beautiful young woman plummets to her death from the balcony of the U.S. Capitol, Assistant U.S. Attorney Anna Curtis is summoned to the scene. The evidence points to a sexual assault and murder. The victim is one of the city’s highest-paid escorts. And the balcony belongs to Washington, D.C.’s sole representative to Congress, the most powerful figure in city politics.
The Congressman proclaims his innocence, but he’s in the middle of a tough primary fight, and the scandal could cost him the election. For Anna, the high-profile case is an opportunity. But as the political stakes rise, she realizes that a single mistake could end her career.

At the same time, her budding romance with Jack Bailey, the chief homicide prosecutor, is at a crossroads. Determined to gain respect in the office, Anna wants to keep their relationship under wraps. But the mounting pressure and media attention that come with the office’s most important case will inevitably expose their relationship—if it doesn’t destroy it first.

The investigation leads Anna to Discretion, a high-end escort service that caters to D.C.’s elite. But with each break in the case, the mystery deepens. And the further Anna ventures into D.C.’s red-light underworld, the larger the target on her own back.

From the secret social clubs where Washington’s most powerful men escape from public view to the asphalt “track” where the city’s most vulnerable women work the streets, Discretion is a gripping exploration of sex, power, and the secrets we all keep.

Allison Leotta was a federal sex-crimes prosecutor in Washington, DC, for twelve years. In 2011, she left the Justice Department to pursue writing full time. She is the acclaimed author of Law of Attraction, Discretion, Speak of the Devil, A Good Killing, and The Last Good Girl and founder of the award-winning blog, The Prime-Time Crime Review. Leotta lives with her husband, Michael, and their two sons outside of Washington, DC. Visit her online at AllisonLeotta.com.

“Discretion is a first-rate thriller. Leotta nails the trifecta of fiction: plot, pace and character. Ranks right up there with the wonderful Linda Fairstein.” —David Baldacci

“Allison Leotta scores big again with Discretion, her top-notch follow up to Law Of Attraction. Smart and sexy, Discretion showcases Leotta’s rock-solid plotting as well as another star turn for her protagonist, Assistant U.S. Attorney Anna Curtis. If you liked Law Of Attraction—and who didn’t?—you’ll love this one!” —John Lescroart

“Allison Leotta’s Discretion is the best legal thriller I’ve read this year, beautifully crafted and frighteningly real. Leotta knows her stuff cold and will bring you into a world of big money, corruption, high-end prostitution and murder. If you’re a fan of Grisham or Richard North Patterson, you simply have to buy this novel.” —Douglas Preston, #1 bestselling co-author of The Monster of Florence and Cold Vengeance

“Discretion is fresh, fast, and addictive, and Allison Leotta's experience as a federal sex-crimes prosecutor shines through on every page. The result is a realistic legal thriller that's as fun to read as it is fascinating.” —Lisa Scottoline, bestselling author of Come Home

“Allison Leotta is quickly making her place at the table of D.C.’s finest crime and legal thriller novelists. She’s an assured and authentic voice, and a highly entertaining storyteller. Discretion is another winner from this talented writer.” —George Pelecanos

“Discretion is a terrific read. Slick, sexy, and very smart. Allison Leotta is a master at creating tension and then mercilessly tightening it. This is the kind of book I love to read, crafted by a wonderfully imaginative writer, who really knows what she is talking about. Allison Leotta is headed to the top of the heap.” —Michael Palmer, New York Times bestselling author of Oath of Office

“Discretion is full of treachery and betrayal, but it's the characters who rule these pages. Allison Leotta expertly ratchets up the suspense and brings to life a fictional world that is cutting-edge current.” —Steve Berry

“Fantastic! Smart, gritty, and fast-paced—Discretion is everything a great thriller should be. I’m a Leotta fan for life.” —Allison Brennan, author of The Prey

“Assistant U.S. Attorney Anna Curtis and FBI agent Samantha Randazzo are the dynamic duo who energize Discretion, a fast, entertaining thriller that centers on the murder of a high class call girl in the office of a United States Congressman.” —Phillip Margolin, New York Times bestselling author of Capitol Murder

"Allison Leotta is by far one of finest new thriller writers today. Discretion will have you on the edge of your seat turning page after page, chockfull of twists and turns. The best thriller I've read this year." –Andrew Gulli, editor of the Strand Magazine and No Rest For The Dead

“Sex and politics collide in Discretion, an intriguing new thriller from Allison Leotta. Leotta, a federal former prosecutor, writes with authority and authenticity. Imagine one of the best episodes of the TV series Law and Order: Special Victims Unit, but set in Washington, D.C., instead of New York City. Besides the realistic feel of the courtroom machinations, Leotta also takes readers on a journey inside the elite of Washington and the world of escort services.” --Associated Press