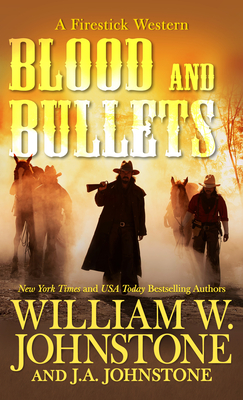 REVENGE ENDS THE DAY WELL As sleepy as Buffalo Peak's been, legendary marshal, Elwood Firestick McQueen, and his deputies Beartooth Skinner and Moosejaw Hendricks never expected a couple of drifters to wake it up--by kidnapping two lovely ladies in town. Hardly the sharpest quills on a cactus, these dim drifters call it courtin'. Firestick doesn't see it that way. Now the woman snatchers are heading for West Texas with their reluctant brides-to-be--and unwittingly plunging trackers Firestick and Moosejaw headlong into a rescue. With only Beartooth keeping the peace back home, Buffalo Peak's wide open for an outlaw ambush. Sure as dirt, a gang of owlhoots clean out the bank, grab a hostage, and flee, spurring Beartooth on a deadly chase. In one lousy day a lot of people have gotten on Firestick's bad side. And with rifle cocked, and vengeance burning, Elwood Firestick McQueen is going to prove just how unforgiving his bad side can be.

William W. Johnstone is the New York Times and USA Today bestselling author of over three hundred novels of Western adventure, military action, and chilling suspense, and with over 35 million books in print, he is the best-selling Western writer in the world. Born in southern Missouri, he was raised with strong moral and family values by his minister father, and tutored by his schoolteacher mother. He left school at fifteen to work in a carnival and then as a deputy sheriff before serving in the army. He went on to become known as the Greatest Western writer of the 21st Century. Visit him online at WilliamJohnstone.net.J.A. Johnstone learned to write from the master himself, Uncle William W. Johnstone, who began tutoring J.A. at an early age. After-school hours were often spent retyping manuscripts or researching his massive American Western History library as well as the more modern wars and conflicts. J.A. worked hard--and learned. Every day with Bill was an adventure story in itself. Bill taught me all he could about the art of storytelling. 'Keep the historical facts accurate, ' he would say. 'Remember the readers, and as your grandfather once told me, I am telling you now: be the best Johnstone you can be. J.A. Johnstone has co-written numerous bestselling series with William W. Johnstone including The First Mountain Man, The Brothers O'Brien, Preacher, and The Last Mountain Man.