The Rising: A Novel (CD-Audio) 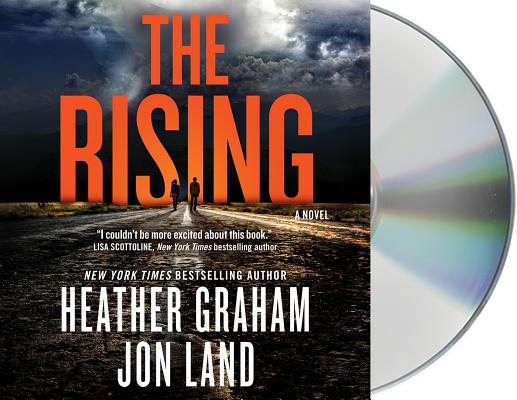 From acclaimed thriller-suspense novelists Heather Graham and Jon Land comes a story of action, mystery, and the endurance of young love in The Rising.

Twenty-four hours. That's all it takes for the lives of two young people to be changed forever.

Alex Chin has the world on a plate. A football hero and homecoming king with plenty of scholarship offers, his future looks bright. His tutor, Samantha Dixon, is preparing to graduate high school at the top of her class. She plans to turn her NASA internship into a career.

When a football accident lands Alex in the hospital, his world is turned upside down. His doctor is murdered. Then, his parents. Death seems to follow him wherever he goes, and now it's after him.

Alex flees. He tells Samantha not to follow, but she became involved the moment she walked through his door and found Mr. and Mrs. Chin as they lay dying in their home. She cannot abandon the young man she loves. The two race desperately to stay ahead of Alex's attackers long enough to figure out why they are hunting him in the first place. The answer lies with a secret buried deep in his past, a secret his parents died to protect. Alex always knew he was adopted, but he never knew the real reason his birth parents abandoned him. He never knew where he truly came from. Until now.

"[Luke] Daniels has such an amazing repertoire of voices that he gives each character--human or cyborg--unique nuances and makes the story exciting and easy to follow. Listeners will be drawn into a sci-fi mystery so believable they'll smell the terrifying whiff of oil that identifies the aliens and their minions." -AudioFile

HEATHER GRAHAM is a New York Times and USA Today bestselling author. She majored in theater arts at the University of South Florida. Her first book was with Dell, and since then, she has written over one hundred novels and novellas including suspense, historical romance, vampire fiction, time travel, occult and Christmas family fare. Her titles include Phantom Evil, Ghost Walk, and Heart of Evil. She has been honored with awards from Walden Books, B. Dalton, Georgia Romance Writers, Affaire de Coeur, RT Book Reviews, and more.

Jon Land is the USA Today bestselling author of more than fifty books, over ten of which feature Texas Ranger Caitlin Strong. The critically acclaimed series has won more than a dozen awards, including the 2019 International Book Award for Best Thriller for Strong as Steel. He is also the author of Chasing the Dragon, a detailed account of the War on Drugs written with one of the most celebrated DEA agents of all time. A graduate of Brown University, Land lives in Providence, Rhode Island and received the 2019 Rhode Island Authors Legacy Award for his lifetime of literary achievements.

"[Luke] Daniels has such an amazing repertoire of voices that he gives each character--human or cyborg--unique nuances and makes the story exciting and easy to follow. Listeners will be drawn into a sci-fi mystery so believable they'll smell the terrifying whiff of oil that identifies the aliens and their minions. To be continued, I hope!" -AudioFile Magazine