Echoes of the Dead: A Special Tracking Unit Novel (Hardcover) 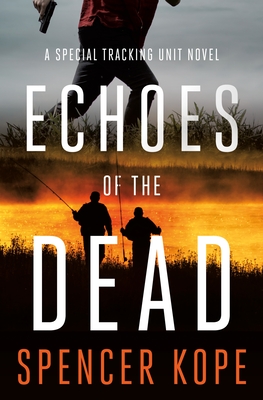 A group of missing friends forces 'Steps' Craig to contend with the most twisted killer he's ever encountered in Spencer Kope's Echoes of the Dead.

Magnus “Steps” Craig is the best 'tracker' in the world, renowned for his ability to follow a person's trail anywhere - no matter the terrain or how old the trail. Steps utilizes his unique talent as part of the elite three-man Special Tracking Unit of the FBI, which is called in on cases that require his unparalleled skills. But there’s a secret to his success. Steps has a kind of synesthesia where he can see the ‘essence’ of a person—which appears to him as a unique color or pattern he calls "shine"—on everything they’ve touched. It's a secret Steps has shared with a rare few people and could, if revealed, endanger not only himself but the unit that he serves.

Steps and the Special Tracking Unit are called in on a new case where the local law enforcement is baffled. Four friends have vanished while on their annual fly-fishing trip—a congressman, a district attorney, a CEO of a major accounting firm, and a cofounder of a successful hedge fund. Now, Steps must search some of the most treacherous terrain, the Sierra Nevada range, as one by one time begins to run out for the missing men. Desperate to save whoever they can, Steps and his team discover that this is no simple missing persons case, but one with sinister motivations unlike any they've seen before.

SPENCER KOPE, author of the Special Tracking Unit series featuring Magnus "Steps" Craig, is the Crime Analyst for the Whatcom County Sheriff's Office. Currently assigned to the Detectives Division, he provides case support to detectives and deputies, and is particularly good at identifying possible suspects. In his spare time he developed a database-driven analytical process called Forensic Vehicle Analysis (FVA) used to identify the make, model and year range of vehicles from surveillance photos. It's a tool he's used repeatedly to solve crimes. One of his favorite pastimes is getting lost in a bookstore, and he lives in Washington State.

"A welcome breath of fresh air... Starkly original and as riveting as it is relentless." --Providence Journal