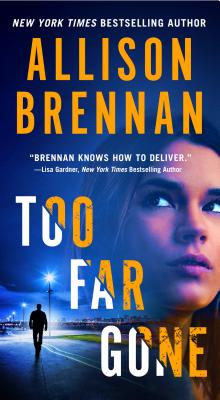 Too Far Gone by Allison Brennan is a thrilling addition to the Lucy Kincaid series that will leave readers breathless.

When a man who appears mentally unstable holds a group of people hostage and dies in a shootout with the FBI, Special Agent Lucy Kincaid is assigned to investigate what happened. Up until two months ago, McMahon was a respected scientist—then his wife left him, he lost his job, and was arrested for assaulting a former colleague. The one person who might have answers — his research assistant — has disappeared.

While Lucy is investigating this bizarre case, her husband Sean is on top of the world: his son Jesse is visiting for the summer. They are having a blast, until someone follows them. Sean is positive that the surveillance is connected to Jesse’s step-father—a man who had once laundered money for a violent drug cartel. But when Lucy and Jesse are run off the road, they begin to wonder if the attack is connected to Jesse … or Lucy’s current case.

Nothing is what it seems—not the McMahon investigation or the car accident. As Sean and Lucy dig deep into the lives of everyone involved, one thing becomes clear: If they don’t find the truth fast, everyone they care about is in danger.

Allison Brennan is the New York Times and USA Today bestselling author of over thirty novels, including the Max Revere Novels (Abandoned, Shattered) and the Lucy Kincaid Novels (Cut and Run, Nothing to Hide). She was nominated for Best Paperback Original Thriller by the International Thriller Writers and is a two-time winner of the Daphne du Maurier Award by Kiss of Death.

Married for more than a quarter of a century, Allison and her husband Dan raised five children. They recently relocated from California to Arizona with their two youngest where they are looking forward to baseball's Spring Training and exploring the Grand Canyon.