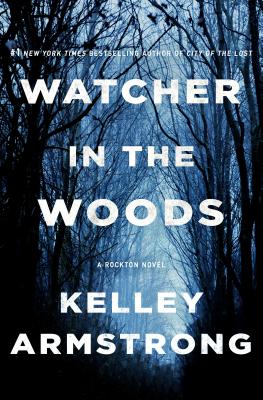 Watcher in the Woods is the next gripping installment of #1 bestselling Kelley Armstrong's riveting Casey Duncan series.

The secret town of Rockton has seen some rocky times lately; understandable considering its mix of criminals and victims fleeing society for refuge within its Yukon borders. Casey Duncan, the town's only detective on a police force of three, has already faced murder, arson, and falling in love in the several months that she's lived there. Yet even she didn't think it would be possible for an outsider to locate the town and cause trouble in the place she's come to call home.

When a US Marshal shows up demanding the release of one of the residents, but won't say who, Casey and her boyfriend, Sheriff Eric Dalton, are skeptical. And yet only hours later, the marshal is shot dead and the only possible suspects are the townspeople and Casey's estranged sister, smuggled into town to help with a medical emergency. It's up to Casey to figure out who murdered the marshal, and why someone would kill to keep him quiet—before the killer strikes again.

Praise for the Rockton Novels:

“The empathetic central characters grapple with the nature of violence and the choices they’re willing to make to protect loved ones. Armstrong delivers surprising twists and keeps readers guessing about who the next victim might be.” —Publishers Weekly

“Kelley Armstrong’s solid Casey Duncan Series… is turning into one of the best new finds of the decade. . This Fallen Prey is the best Rockton novel so far, as this town of people with no pasts confront a man who seems to spread death. Is he a killer or a potential victim? Slick plotting and good characters are hallmarks of this clever series.” —Globe and Mail

“The unusual setup and isolated location increase tension in a fast-paced entry that will keep readers guessing.” —Publishers Weekly

“Armstrong keeps the plot turning and cranks up the tension from one chapter to the next. She's already shown she's good at that, and A Darkness Absolute is no exception.” —The Oklahoman

CITY OF THE LOST

"[A] locked room mystery on steroids; readers should prepare for an all-nighter to finish it." —Booklist

"Excellent first in a new thriller series... A highly unusual set-up sets the stage for a distinctive cast of characters and a page-turning plot." —Publishers Weekly (starred review)