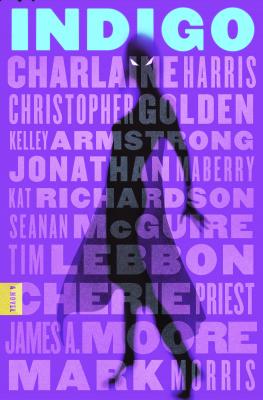 Investigative reporter Nora Hesper spends her nights cloaked in shadows. As Indigo, she’s become an urban myth, a brutal vigilante who can forge darkness into weapons and travel across the city by slipping from one patch of shadow to another. Her primary focus both as Nora and as Indigo has become a murderous criminal cult called the Children of Phonos. Children are being murdered in New York, and Nora is determined to make it stop, even if that means Indigo must eliminate every member. But in the aftermath of a bloody battle, a dying cultist makes claims that cause Indigo to question her own origin and memories.

Nora’s parents were killed when she was nineteen years old. She took the life insurance money and went off to explore the world, leading to her becoming a student of meditation and strange magic in a mountaintop monastery in Nepal…a history that many would realize sounds suspiciously like the origins of several comic book characters. As Nora starts to pick apart her memory, it begins to unravel. Her parents are dead, but the rest is a series of lies. Where did she get the power inside her?

CHARLAINE HARRIS is a New York Times bestselling author who has been writing for over thirty years. She was born and raised in the Mississippi River Delta area. She is the author of the Aurora Teagarden mysteries, the Shakespeare mysteries, the Harper Connelly mysteries, the Cemetery Girl mysteries, and the Sookie Stackhouse urban fantasy series, which is the basis for the HBO show True Blood. Harris now lives in Texas with her husband.

CHRISTOPHER GOLDEN is the award-winning, bestselling author of such novels as The Myth Hunters, The Boys Are Back in Town, Strangewood, and Of Saints and Shadows. He co-wrote the lavishly illustrated novel Baltimore, or, The Steadfast Tin Soldier and the Vampire with Mike Mignola, and the comic book series featuring the same character. His novel Ararat won the 2017 Bram Stoker Award for best horror novel.

JONATHAN MABERRY is a New York Times bestselling and multiple Bram Stoker Award-winning author of Deep Silence, Kill Switch, Predator One, Code Zero, Fall of Night, Patient Zero, the Pine Deep Trilogy, The Wolfman, Zombie CSU, and They Bite, among others. His V-Wars series has been adapted by Netflix, and his work for Marvel Comics includes The Punisher, Wolverine, DoomWar, Marvel Zombie Return and Black Panther. His Joe Ledger series has been optioned for television.

KAT RICHARDSON is the nationally bestselling author of the Greywalker paranormal detective series and a co-author of the collaborative novel Indigo.

SEANAN McGUIRE is the author of the October Daye urban fantasy series, the InCryptid series, and other works. She also writes darker fiction as Mira Grant.

Seanan lives in Seattle with her cats, a vast collection of creepy dolls and horror movies, and sufficient books to qualify her as a fire hazard.

She was the winner of the 2010 John W. Campbell Award for Best New Writer, and in 2013 she became the first person ever to appear five times on the same Hugo ballot.

Tim Lebbon is the New York Times bestselling author of the movie novelizations of 30 Days of Night and The Cabin in the Woods. He has also written many critically acclaimed dark fantasy and crime novels. Tim has won three British Fantasy Awards, a Bram Stoker Award, a Shocker, a Tombstone and been a finalist for the International Horror Guild and World Fantasy Awards.

Cherie Priest debuted to great acclaim with Four and Twenty Blackbirds, Wings to the Kingdom, and Not Flesh Nor Feathers, a trilogy of Southern Gothic ghost stories featuring heroine Eden Moore. She is also the author of Fathom, Dreadnought, and Boneshaker, which was nominated for a Nebula and Hugo Award and won the PNBA Award and the Locus Award for best science-fiction novel. She is an associate editor at Subterranean Press. Born in Tampa, Florida, Priest went to college at Southern Adventist University and earned her master’s in rhetoric at the University of Tennessee. After spending most of her life in the southern United States, she recently moved to Seattle, Washington, with her husband, Aric, and a fat black cat named Spain.

MARK MORRIS is an English author known for his horror novels (The Society of Blood, The Wraiths of War, etc.) and for his novels based on the BBC's Doctor Who series.