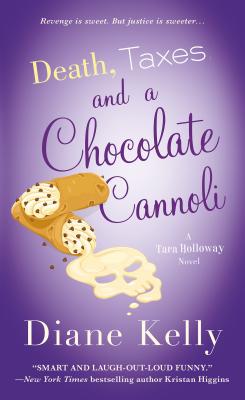 By Diane Kelly
Email or call for price.
Out of Print

TRUE CRIME DOESN'T PAY...TAXES.
IRS Special Agent Tara Holloway has risked her life to take down drug cartels and other dangerous tax frauds. But going after the mob is one offer she can't refuse...

He's no Tony Soprano. Still, local crime boss Giustino "Tino" Fabrizio is one shady character that Tara would love to see behind bars. He operates a security business-or so he claims on his tax forms-but his clients don't feel so secure when it's time to pay up. Problem is, no one can get close enough to nail this wiseguy for extortion. No one, that is, except Tara...

"WITTY, REMARKABLE, AND EVER SO ENTERTAINING."
-Affaire de Coeur

Going undercover, Tara lands a waitress job at Benedetta's Bistro-which is owned and operated by Tino's wife. Being surrounded by cream-filled cannolis could be hazardous to Tara's waistline...even though the way to a man's heart is through his stomach, right? Only thing Tara can't afford to do now is blow her cover. Because serving Tino his just desserts will surely come with a price...
"TARA HOLLOWAY IS THE IRS'S ANSWER TO STEPHANIE PLUM-SMART, SASSY, AND SO MUCH FUN."-New York Times bestselling author Gemma Halliday