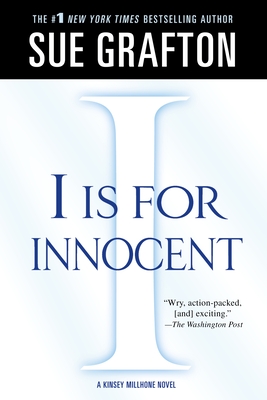 Five years ago David Barney was acquitted of the murder of his rich wife, Isabelle. Now, Isabelle's ex-husband, Ken Voigt—who is suing Barney for her estate—is claiming the jury made a fatal mistake...

Enter P.I. Kinsey Millhone, who takes the Barney case over from a former colleague…and comes up with more questions than answers. Why are Mr. Barney's witnesses denying ever having spoken to him? Why did Isabelle have so many enemies—including but not limited to her best friend, Voight's second wife, and her own twin sister?

I IS FOR INNOCENT

But the most troubling question of all is: Why is it that everything David Barney has to say about his beloved Isabelle still checks out? Now it's up to Kinsey to figure out who's getting away with murder . . . .before she courts her own.

#1 New York Times bestselling author Sue Grafton (1940-2017) entered the mystery field in 1982 with the publication of 'A' Is for Alibi, which introduced female hard-boiled private investigator, Kinsey Millhone, operating out of the fictional town of Santa Teresa, (aka Santa Barbara) California, and launched the bestselling Kinsey Millhone Alphabet Mysteries. In addition to her books, she’d published several Kinsey Millhone short stories, and with her husband, Steven Humphrey, wrote numerous movies for television, including “A Killer in the Family” (starring Robert Mitchum), “Love on the Run” (starring Alec Baldwin and Stephanie Zimbalist) and two Agatha Christie adaptations, “Sparkling Cyanide” and “Caribbean Mystery,” which starred Helen Hayes. Grafton is published in 28 countries and in 26 languages.

“Intelligent, fast-paced, and filled with memorable characters . . . Kinsey remains as engaging as ever.” —The New York Times Book Review

“Smart, tough, and thorough…Kinsey Millhone is a pleasure.” —The Bloomsbury Review

“Kinsey is one of the most persuasive of the new female operatives…She's refreshingly free of gender clichés. Grafton, who is a very witty writer, has also given her sleuth a nice sense of humor--and a set of Wonder Woman sheets to prove it.” —Boston Herald

“Kinsey's got brains and a sense of humor.” —Kirkus Reviews