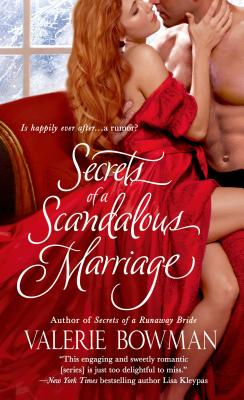 By Valerie Bowman
Email or call for price.
Out of Print

A duchess awaiting trial for her vile husband's murder is the most delicious gossip the ton has heard in years. But for Kate Townsende, the woman in question, it could be a matter of life and death. And when a shrewd and handsome nobleman offers to publish her side of the story while arranging for a barrister to take her case, she's tempted by much more than the chance to defend herself…

James Bancroft, Viscount Medford, tells himself he's only interested in a bestselling pamphlet, but Kate's stubborn determination is captivating. Could the accused widow be telling the truth? At first, James isn't sure of anything besides his growing desire for her—but before long he's willing to risk much more than his reputation to make the infamous beauty his wife…

Secrets of a Scandalous Marriage is the third Secret Brides novel from Valerie Bowman.

Valerie Bowman is an award-winning author who writes Regency-set historical romance novels aka Racy Regency Romps! Since her debut in 2012, Valerie's books have received starred reviews from Publisher's Weekly, Booklist, and Kirkus. She's been an RT Reviewers' Choice nominee for Best First Historical Romance and Best Historical Romance Love and Laughter. Two of her books have been nominated for the Kirkus Prize for fiction and New York Times bestselling author Lisa Kleypas calls them, "Too delightful to miss!"

Valerie has a B.A. in English Language and Literature with a minor in history from Smith College. By day, she is a technical editor at a computer software company. By night, she combines her love of writing, history, and romance to craft stories about people falling in love.

Originally from Rantoul, Illinois, Valerie lives in Jacksonville, Florida with her family including her two rascally dogs. When she's not writing, she keeps busy reading, traveling, or vacillating between watching crazy reality TV or PBS.

“Bowman woos Regency romance fans with this final novel in her Secret Brides trilogy (after Secrets of a Wedding Night and Secrets of a Runaway Bride). Lady Katherine Townsende, Duchess of Markingham, has been imprisoned in the Tower of London for the murder of her husband. James Bancroft, Viscount Medford, visits Kate with a proposition: he wants her to write a pamphlet telling her side of the story, convinced that the publication would be beneficial to both of them. In return, she asks for release into James's custody, as law allows her to be supervised by a nobleman. James, known as "Lord Perfect" for his meticulous ways, is surprised by her beauty and intelligence, and he's not prepared for the disruption she brings to his orderly household. The attraction between the two is well crafted and plays out in unusual fashion: James's structured life has left him little time for rakish behavior, leaving Kate to do the seducing. The murder trial adds weight and tension to this refreshing page-turner.” —Publishers Weekly (Starred Review)

“From the gripping opening line to the highly satisfying climax, Bowman keeps readers in her grasp with her unique storytelling and unconventional plotting. Readers will be captivated by how her smart and sensual story unfolds.” —Romantic Times (4 1/2 stars!)