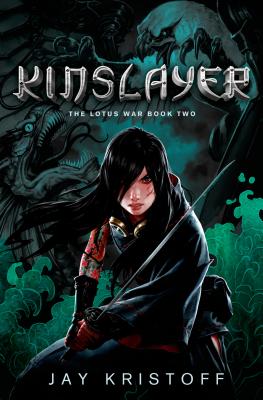 By Jay Kristoff
Email or call for price.
Out of Print

A SHATTERED EMPIRE
The mad Shogun Yoritomo has been assassinated by the Stormdancer Yukiko, and the threat of civil war looms over the Shima Imperium. The toxic blood lotus flower continues to ravage the land, the deadlands splitting wider by the day. The machine-worshippers of the Lotus Guild conspire to renew the nation's broken dynasty and crush the growing rebellion simultaneously - by endorsing a new Shogun who desires nothing more than to see Yukiko dead.

A DARK LEGACY
Yukiko and the mighty thunder tiger Buruu have been cast in the role of heroes by the Kagé rebellion. But Yukiko herself is blinded by rage over her father's death, and her ability to hear the thoughts of beasts is swelling beyond her power to control. Along with Buruu, Yukiko's anchor is Kin, the rebel Guildsman who helped her escape from Yoritomo's clutches. But Kin has his own secrets, and is haunted by visions of a future he'd rather die than see realized.

A GATHERING STORM
Kagé assassins lurk within the Shogun's palace, plotting to end the new dynasty before it begins. A waif from Kigen's gutters begins a friendship that could undo the entire empire. A new enemy gathers its strength, readying to push the fracturing Shima imperium into a war it cannot hope to survive. And across raging oceans, amongst islands of black glass, Yukiko and Buruu will face foes no katana or talon can defeat.

The ghosts of a blood-stained past.

JAY KRISTOFF is the New York Times and internationally bestselling author of The Lotus War, The Illuminae Files and The Nevernight Chronicle. He is the winner of four Aurealis Awards, an ABIA, nominee for the Locus award, David Gemmell Morningstar and Legend awards, named multiple times in the Kirkus and Amazon Best Teen Books list and published in over thirty countries, most of which he has never visited. He is as surprised about all of this as you are. He is 6’7 and has approximately 12,365 days to live. He abides in Melbourne with his secret agent kung-fu assassin wife, and the world’s laziest Jack Russell. He does not believe in happy endings.

“Kinslayer is intense and heart-punching. Are you ready? Probably not. Will you venture into the storm anyway? I think you should.” —YABooksCentral.com

“Kristoff is the master of unique and intense plots and huge twists. This book has it all--and a nice little bow to tie it all up with. There are swords, action, friendship, a conspiracy, grief and hope. It's going on my "Amazing Reads" shelf, and I urge you to pick it up.” —USAToday.com

“With its geisha girls in gas masks and canvas blimps spewing black exhaust as they chug across the sky, Stormdancer paints a vivid picture of a decrepit, steampunk Japan. It's startling to witness a country that so reveres nature presented in such an environmentally compromised position, as it is in the kickoff to Jay Kristoff's "The Lotus War" series. But it's this inventive juxtaposition that makes Stormdancer such a thrilling addition to the increasingly tired yet continuously expanding dystopian scene.... [A] fast-paced, fantastical adventure [that] is sharp as a Shogun's sword.” —The LA Times

“Stormdancer is an intoxicating joyride into steampunklandia with a magical dose of mythology, the supernatural, violence, dystopian themes, and a top-notch brassy heroine who rivals Katniss Everdeen of The Hunger Games. Yes, I did say that!” —Huffington Post

“Jay Kristoff's Stormdancer is steampunk by way of feudal Japan, in which a young woman with unusual abilities befriends a thunder tiger in a polluted industrial wasteland. Strong heroines, detailed settings, and fascinating legends hit the sweet spot.” —Publishers Weekly

“Japanese Steampunk unafraid to engage with the dark side of the subgenre. The Lotus must bloom!” —SF Signal

“[T]he plot takes off when the mythical arashitora (literally 'stormtiger') forms a strong bond with dagger-wielding heroine, Yukiko. Her relationship with the griffin-like creature is especially poignant in light of the personal losses she reveals as the story unfolds... it's the bonds of family and friendship that feel the truest, with heartwrenching effect.” —Romantic Times

“Think Lassie, if Kurosawa had been the director and Lassie had been three tons of angry mythical demon-shredding sass bent on pushing Timmy down the well... A colorful cast of supporting characters and thoughtful plotting add further to Stormdancer's appeal, but, really, Kristoff has the reader at "girl meets griffin." The captivating backdrop, graceful prose and army of mechanized samurai are all just added bonuses.” —Shelf Awareness

“What's that? You say you've got a Japanese Steampunk novel with mythic creatures, civil unrest, and a strong female protagonist? I'm afraid I missed everything you said after "Japanese Steampunk." That's all I really needed to hear.” —Patrick Rothfuss, #1 New York Times bestselling author of The Name of the Wind and The Wise Man's Fear

“With airships, demons, and lashings of revolutionary swordplay, this chi-fueled vision of a steampunk feudal Japan will blow your split-toed socks off.” —Scott Westerfeld, New York Times bestselling author of Leviathan

“Jay Kristoff pushes the steampunk genre exactly where it needs to go, away from Victorian London's over-trodden lanes and into the great wide world. With its rocketing action, eccentric and convincing characters, and deep immersion in heroic Japanese culture, Stormdancer slammed my head into an updated vision of the great chanbara films of Kurosawa and Kobayashi. I'll be waiting for more from Mr. Kristoff.” —K.W. Jeter, author of The Kingdom of Shadows

“Set in a complex and richly imagined world, Stormdancer draws on inspirations as widespread as epic fantasy, steampunk, and Japanese mythology, effortlessly piecing them together into an alternate history that is as vibrant as it is disturbing. Yukiko is an admirable heroine, made of compassion and courage, but it's the remarkable friendship forged between Yukiko and the majestic thunder tiger, Buruu, that readers will find truly unforgettable. In this breathtaking debut fantasy, Kristoff has given us an adventure teeming with impossible quests and betrayals, rebellion and murder, jealousy and harbored secrets. I eagerly look forward to seeing where his imagination takes us next.” —Marissa Meyer, New York Times bestselling author of Cinder

“Kristoff's debut is a lyrical triumph of chainsaw swords and thunder tigers that steampunk fans and mythology buffs will devour.” —Kevin Hearne, author of The Iron Druid Chronicles

“If you enjoy rich detail and sensual writing, you'll dig it.... Bristling with energy and enthusiasm, this is the start of what should be a deservedly popular series.” —Library Journal

“Compelling characters--particularly Yukiko, the Arashitora Buruu, and the artificer Kin--a strong environmental message, and a thrilling battle setting the stage for the sequel. Offer this to fans of Scott Westerfeld's Leviathan trilogy or Philip Reeve's Hungry City Chronicles.” —Booklist