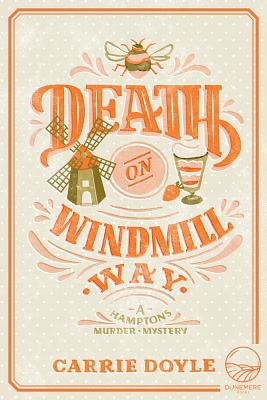 Murder in the Hamptons, from a New York Times bestselling author Carrie Doyle.

Cozy mystery fans and lovers of Louise Penny, Agatha Christie and Alexander McCall Smith should prepare a hearty snack and snuggle in for this compelling page-turner by best-selling author Carrie Doyle. Mouth-watering food descriptions, nail-biting scenes of suspense, a winning heroine, and a captivating cast of characters pack the launch of this series, one that’s sure to entertain readers for years to come.

The Hamptons are known for beautiful beaches, luxurious living, millionaire mansions, and now…murder! Antonia Bingham, a renowned chef and the new owner of East Hampton’s Windmill Inn, escaped to the Hamptons to get away from a harrowing past. Yet now she finds herself in more danger than ever when she discovers the inn’s previous owners may have been the victims of murder. Will her overly inquisitive personality be her downfall as she digs up secrets in her attempt to solve the crime?

The Hamptons are known for beautiful beaches, luxurious living, millionaire mansions, and now...murder!

Carrie Doyle Karasyov lives with her husband and sons in New York City and East Hampton, NY. A fan of mystery and crime novels, a cooking enthusiast, a former employee of Food Network star Ina Garten’s at the Barefoot Contessa store, and a generally nosy person, Carrie combined all of her interests to create Antonia Bingham, the foodie innkeeper and reluctant detective character who stars in the Hamptons Murder Mystery series. Carrie is the bestselling author of six novels (written as Carrie Karasyov, five of them with Odd Mom Out’s Jill Kargman), and five optioned screenplays (one of which was produced and screened at the Sundance festival), as well as a Contributing Editor to Hamptons magazine. The founding editor of Marie Claire magazine’s Russian edition, as well as a former editor at Harper’s Bazaar magazine and Harper’s Bazaar Russia, Carrie is currently developing an animated comedy series she has co-written with her 15- and 13-year-old sons. Visit Carrie’s author site at www.carriekarasyov.com for news on the next installment of the Hamptons Murder Mystery series.

“Doyle (The Infidelity Pact, 2008, etc.) is a self-described “foodie” and an avid cheerleader for the quaint village of East Hampton, New York . . . an appealing, three-dimensional heroine and some clever plot twists make this an enjoyable, quick read.”  —Kirkus Reviews

“This series is enjoyable and delightful. I wasn’t the least bit surprised that the latest Hamptons Murder Mystery was as amazing as the last two books. Carrie Doyle has the ability to paint such a setting and character that mystery lovers alike will delight in this read."—Bibliophile Reviews

“There’s something fun about discovering a series that you love and just binging your way through it. That is exactly what I did with Carrie Doyle's Hamptons Murder Mystery series. The books are fun reading with a great cast of characters...[and the] storylines weave in great background on the history of the Hamptons, as well as some mouth-watering food descriptions. Carrie worked for Ina Garten when she owned and ran The Barefoot Contessa in the Hamptons, so she writes about food with great authority. She also has been a summer and weekend resident of East Hampton for decades, so she knows the lay of the land. Armchair vacation travel with a mystery; I love it." —Bookreporter.com