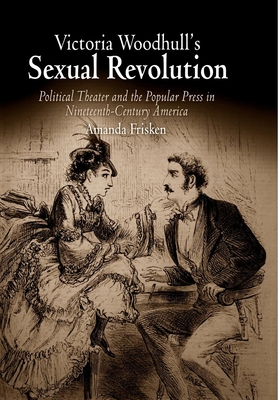 Victoria Woodhull, the first woman to run for president, forced her fellow Americans to come to terms with the full meaning of equality after the Civil War. A sometime collaborator with Susan B. Anthony and Elizabeth Cady Stanton, yet never fully accepted into mainstream suffragist circles, Woodhull was a flamboyant social reformer who promoted freedom, especially freedom from societal constraints over intimate relationships. This much we know from the several popular biographies of the nineteenth-century activist. But what we do not know, as Amanda Frisken reveals, is how Woodhull manipulated the emerging popular media and fluid political culture of the Reconstruction period in order to accomplish her political goals. As an editor and public speaker, Woodhull demanded that women and men be held to the same standards in public life. Her political theatrics brought the topic of women's sexuality into the public arena, shocking critics, galvanizing supporters, and finally locking opposing camps into bitter conflict over sexuality and women's rights in marriage. A woman who surrendered her own privacy, whose life was grist for the mills of a sensation-mongering press, she made the exposure of others' secrets a powerful tool of social change. Woodhull's political ambitions became inseparable from her sexual nonconformity, yet her skill in using contemporary media kept her revolutionary ideas continually before her peers. In this way Woodhull contributed to long-term shifts in attitudes about sexuality and the slow liberation of marriage and other social institutions. Using contemporary sources such as images from the "sporting news," Frisken takes a fresh look at the heyday of this controversial women's rights activist, discovering Woodhull's previously unrecognized importance in the turbulent climate of Radical Reconstruction and making her a useful lens through which to view the shifting sexual mores of the nineteenth century.