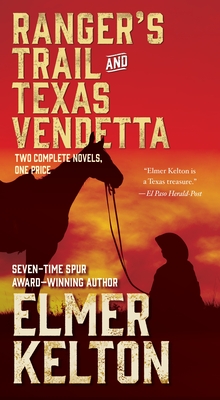 Two complete novels from Elmer Kelton in one low-priced edition

Ranger's Trail
Spring of 1874: Ranger companies are being reorganized and David "Rusty" Shannon is the most sought-after veteran. But he has a new goal: to marry Josie Monahan. He also feels responsibility for Andy Pickard, who he rescued from the Comanche. But tragedy changes Rusty's plans and bent on revenge, he pursues Josie's killer. But the trail he follows may lead him astray.

Texas Vendetta
Young Andy Pickard is in the midst of a bloody vendetta. Pickard and Farley Brackett, a former Confederate soldier, must deliver prisoner Jayce Landon to the sheriff of a neighboring county for killing a man named Ned Hopper. The assignment is complicated, for the Landon and Hopper families are in a blood feud: the Landons to free Jayce, the Hoppers to kill him.

This edition of the book is the deluxe, tall rack mass market paperback.

Elmer Kelton (1926-2009) was the award-winning author of more than forty novels, including The Time It Never Rained, Other Men’s Horses, Texas Standoff and Hard Trail to Follow. He grew up on a ranch near Crane, Texas, and earned a journalism degree from the University of Texas. His first novel, Hot Iron, was published in 1956. Among his awards were seven Spurs from Western Writers of America and four Western Heritage awards from the National Cowboy Hall of Fame. His novel The Good Old Boys was made into a television film starring Tommy Lee Jones. In addition to his novels, Kelton worked as an agricultural journalist for 42 years. He served in the infantry in World War II. He died in 2009.

“Kelton is a master storyteller who offers more than just blood and gunsmoke. The right blend of action, drama, romance, humor and suspense makes this a handsome addition to his ongoing saga of the Old West.” —Publishers Weekly, on Ranger's Trail

“Storytelling as rich as a bank ripe for robbing.” —Kirkus Reviews, on Texas Vendetta