The Inexplicables: A Novel of the Clockwork Century (Paperback) 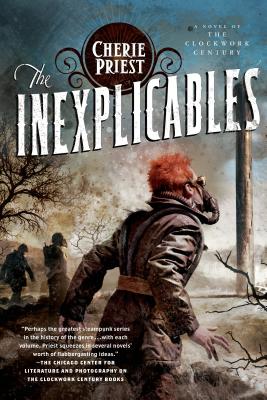 Rector "Wreck ‘em" Sherman was orphaned as a toddler in the Blight of 1863, but that was years ago. Wreck has grown up, and on his eighteenth birthday, he'll be cast out out of the orphanage.

And Wreck's problems aren't merelyabout finding a home. He's been quietly breaking the cardinal rule of any good drug dealer and dipping into his own supply of the sap he sells. He's also pretty sure he's being haunted by the ghost of a kid he used to know—Zeke Wilkes, who almost certainly died six months ago. Zeke would have every reason to pester Wreck, since Wreck got him inside the walled city of Seattle in the first place, and that was probably what killed him.Maybe it's only a guilty conscience, but Wreck can't take it anymore, so he sneaks over the wall.

The walled-off wasteland of Seattle is every bit as bad as he'd heard, chock-full of the hungry undead and utterly choked by the poisonous, inescapable yellow gas. And then there's the monster. Rector's pretty certain that whatever attacked him was not at all human—and not a rotter, either. Arms far too long. Posture all strange. Eyes all wild and faintly glowing gold and known to the locals as simpley "The Inexplicables."

In the process of tracking down these creatures, Rector comes across another incursion through the wall—just as bizarre but entirely attributable to human greed. It seems some outsiders have decided there's gold to be found in the city and they're willing to do whatever it takes to get a piece of the pie unless Rector and his posse have anything to do with it.

Cherie Priest debuted to great acclaim with Four and Twenty Blackbirds, Wings to the Kingdom, and Not Flesh Nor Feathers, a trilogy of Southern Gothic ghost stories featuring heroine Eden Moore. She is also the author of Fathom, Dreadnought, and Boneshaker, which was nominated for a Nebula and Hugo Award and won the PNBA Award and the Locus Award for best science-fiction novel. She is an associate editor at Subterranean Press. Born in Tampa, Florida, Priest went to college at Southern Adventist University and earned her master’s in rhetoric at the University of Tennessee. After spending most of her life in the southern United States, she recently moved to Seattle, Washington, with her husband, Aric, and a fat black cat named Spain.

“Priest delivers a fast-moving story filled with cool steampunk technology and scary zombies. Fans of science fiction will find much to enjoy here. An impressive and auspicious genre-hopping adventure.” —Kirkus Reviews on Boneshaker