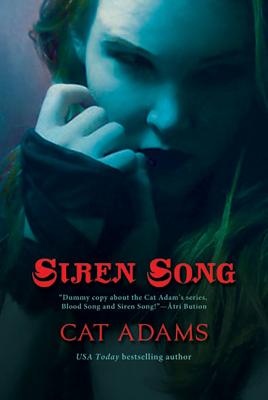 In Celia Graves's world, vampires roam the alleys of Tinseltown, street corner psychics have real powers, and cops use memory enhancement spells. But Celia thought she was an ordinary human, albeit one with a clairvoyant best friend and a ghostly little sister.

The vampire attack that made Celia an Abomination forces her to take food in liquid form and gives a whole new meaning to the word "sunburn." She's slowly adjusting (therapy sessions and all) when she discovers that the attack awakened a hidden part of her heritage: Celia is part Siren, able to enthrall men—and enrage women.

Her best friend's murder is unsolved; the cops think Celia should be in jail or staked; and her old lover, mage Bruno DeLuca, has something important to tell her. To top it all off, Celia's been summoned to the Sirens' island.

Cat Adams is the author of the much-lauded Blood Singer series, which began with Blood Song and continued with Siren Song and Demon Song.  Adams is the joint pen-name of C.T. Adams and Cathy Clamp, who live deep in the heart of Texas.  They are USA Today bestselling authors with their Sazi series.