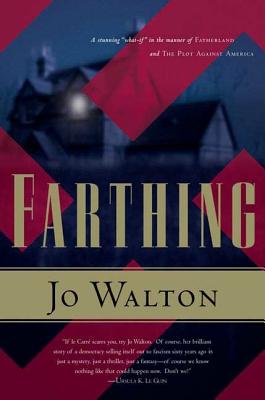 One summer weekend in 1949--but not our 1949--the well-connected "Farthing set," a group of upper-crust English families, enjoy a country retreat. Lucy is a minor daughter in one of those families; her parents were both leading figures in the group that overthrew Churchill and negotiated peace with Herr Hitler eight years before.
Despite her parents' evident disapproval, Lucy is married--happily--to a London Jew. It was therefore quite a surprise to Lucy when she and her husband David found themselves invited to the retreat. It's even more startling when, on the retreat's first night, a major politician of the Farthing set is found gruesomely murdered, with abundant signs that the killing was ritualistic.
It quickly becomes clear to Lucy that she and David were brought to the retreat in order to pin the murder on him. Major political machinations are at stake, including an initiative in Parliament, supported by the Farthing set, to limit the right to vote to university graduates. But whoever's behind the murder, and the frame-up, didn't reckon on the principal investigator from Scotland Yard being a man with very private reasons for sympathizing with outcasts and looking beyond the obvious.
As the trap slowly shuts on Lucy and David, they begin to see a way out--a way fraught with peril in a darkening world.

Jo Walton won the John W. Campbell Award for Best New Writer on publication of her debut novel "The King's Peace." Her novel "Tooth and Claw" won the World Fantasy Award. A native of Wales, she lives in Montreal.

"If Le Carré scares you, try Jo Walton. Of course her brilliant story of a democracy selling itself out to fascism sixty years ago is just a mystery, just a thriller, just a fantasy--of course we know nothing like that could happen now. Don't we?"
--Ursula K. Le Guin on Farthing

"It really is one of those books that succeeds in almost too many ways to count. It's a great, engaging read, and sharp as a knife. The most meaningful parahistorical novel I've come across in a long time, succinct and rivetingly readable."
--Robert Charles Wilson on Farthing

"Farthing starts out as a cozy period house party mystery, becomes a brilliant alternate history yarn, and at last reveals itself to be a chilling political thriller. It's smart, riveting, and deeply moving. Once you start reading, don't plan to put it down."
--Emma Bull


"Succeeds in almost too many ways to count. It's a great, engaging read, and sharp as a knife."


"It's smart, riveting, and deeply moving. Once you start reading, don't plan to put it down."


"A wonderful book, simultaneously a gripping mystery and a harrowing cautionary tale."