Nightwatch on the Hinterlands (The Weep #1) (Hardcover) 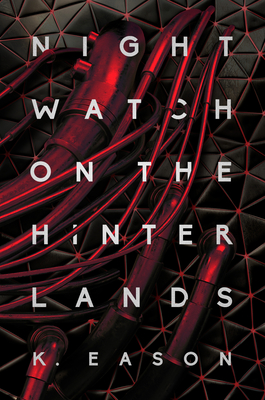 Set in the universe of Rory Thorne, this new sci-fi mystery follows an unlikely duo who must discover the motive behind an unusual murder.

THE TEMPLAR: When Lieutenant Iari hears screams in the night, she expects to interrupt a robbery or break up a fight. Instead she discovers a murder with an impossible suspect: a riev, one of the battle-mecha decommissioned after the end of the last conflict, repurposed for manual labor. Riev don't kill people. And yet, clearly, one has. Iari sets out to find it.

THE SPY: Officially, Gaer is an ambassador from the vakari. Unofficially, he's also a spy, sending information back to his government, unfiltered by diplomatic channels. Unlike Iari, Gaer isn't so sure the riev's behavior is just a malfunction, since the riev were created using an unstable mixture of alchemy and arithmancy.

As Gaer and Iari search for the truth, they discover that the murderous riev is just a weapon in the hands of a wielder with wider ambitions than homicide--including releasing horrors not seen since the war, that make a rampaging riev seem insignificant...

K. Eason is a lecturer at the University of California, Irvine, where she and her composition students tackle important topics such as the zombie apocalypse, the humanity of cyborgs, and whether or not Beowulf is a good guy. Her previous publications include the On the Bones of Gods fantasy series with 47North, and she has had short fiction published in Cabinet-des-Fées, Jabberwocky 4, Crossed Genres, and Kaleidotrope.

Praise for Nightwatch on the Hinterlands

"Nightwatch is a book that, in less capable hands, might collapse under its own inventive worldbuilding. But Eason pulls it off, thanks to perfect pacing and the delightfully colorful duo at its core. Splendid stuff!" —Jason M. Hough, New York Times bestselling author

"Interstellar intrigue, nightmares from the void, killer robots, and the magic of arithmancy. Nightwatch on the Hinterlands is a perfect blending of sci-fi and fantasy with a pair of the most unlikely and enjoyable detectives you'll ever meet." —Stephen Blackmoore, author of the Eric Carter novels

“Readers seeking a genre-blending tale will enjoy Eason’s no-nonsense tone as she sets the plot of a thriller within her established world of science fiction and fantasy.” —Booklist

"Eason has a real talent for building engrossing and intricate worlds that feel both whimsical and real at the same time." —The Quill to Live

Praise for K. Eason and the Rory Thorne universe

“Fun and feminist, unique and stylish, with a heroine who'll steal your heart. If fairy tales and space opera had a clever baby with a big vocabulary and a rebellious streak, this would be it.” —Delilah S. Dawson, New York Times-bestselling author of Galaxy's Edge: Black Spire

"This is big, imaginative space opera at its best. Filled with complex characters and twisty politics, Rory Thorne is an awesome ride." —Michael Mammay, author of Planetside

"Readers will be clamoring for the second installment before Chapter One is over. Told with just enough editorializing from a Dickensian narrator, this story delights from cover to cover. The political intrigue never fails to surprise, each character is layered and compelling, and there’s a perfect balance between science-fiction action and fairy-tale fantasy. Do not, under any circumstances, miss out on this." —Kirkus (starred review)

"Eason adds a feminist modern twist to fairy tale and sf tropes while presenting an intergalactic adventure that enthralls in its own right, striking that ideal balance between original and familiar.... A delightful start to what promises to be a smart, unique series." —Booklist (starred review)

"Beautifully layered, endlessly entertaining....  Using a mixture of hacking skills and hexes, political maneuvering, martial arts, and flirting, Rory manages to destroy the multiverse and control her own fate. How she gets there is a journey well worth the read. Exquisitely written with complex characters, sardonic wit, and immersive worldbuilding. Highly recommended." —Library Journal (starred review)

"Take a deep breath, close your eyes, and picture outer space plus fairy tales plus political intrigue plus magic. Whatever you’re thinking of, How Rory Thorne Destroyed the Multiverse is all those things, but better." —Hey Alma

"Joyfully, delightfully amazing.... Definitely one of my favorite books of the year thus far." —The Roarbots