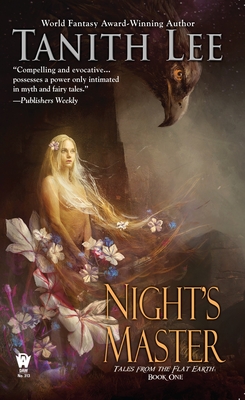 Rediscover her classic, most popular fantasy series, Tales from the Flat Earth, where demons and gods grant wonders and wreak havoc. Visit the Upperearth, where dwell the gods; the Underearth, the realm of nightmarish demons; the Innerearth, domain of the dead; and the Flat Earth itself, the home of mortals.

Supreme amongst them all is the demon god Azhrarn, Night’s Master, whose deadly whims could change the lives of those in the Flat Earth. Azhrarn holds in his heart a mystery which could alter the very existence of the Flat Earth forever.

Praise for Tales of the Flat Earth:

“Lee has craftsmanship...style, wit, delicacy, strength, and depth of imagination and a sure touch for words.... Night's Master is like a treasure chest spilled open with cascading dreams of silk, jewels, demon horses, perfumes, spices, tapestries, and (most previous of all) a sense of wonder.” —The British Fantasy Society Bulletin

“A strange fin de siècle eroticism pervades these finely felt and well-written tales. They possess a certain raw power that derives from a simplicity recalling myth and legend.” —Publishers Weekly

“A satisfying fantasy, and one which shows real talent at work. It could easily become a cult item. Recommended.” —Library Journal

“The style is complex and fascinating, the plotting and interweaving of characters and action meticulously worked out and invariably entertaining.” —SF Chronicle

“Here we have storytelling at its best and fantasy in its purest and strongest essence. Tanith Lee portrays with a masterful hand an amazing, ancient world.” —SFSite

“Tanith Lee is fantastika’s Joyce Carol Oates…. You can imagine these timeless stories whispered around an oasis campfire or in a starship’s engine room.” ―Locus (for Tanith Lee)