Someone to Remember (The Westcott Series) (Mass Market) 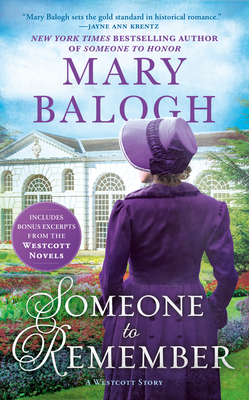 It’s never too late to fall in love in this enchanting new story, a novella in the Westcott series from New York Times bestselling author Mary Balogh.

Matilda Westcott has spent her life tending to the needs of her mother, the Dowager Countess of Riverdale, never questioning the web of solitude she has spun herself. To Matilda, who considers herself an aging spinster daughter, marriage is laughable—love is a game for the young, after all. But her quiet, ordered life unravels when a dashing gentleman from her past reappears, threatening to charm his way into her heart yet again.

Charles Sawyer, Viscount Dirkson, does not expect to face Matilda Westcott thirty-six years after their failed romance. Moreover, he does not expect decades-old feelings to emerge at the very sight of her. When encountering Matilda at a dinner hosted by the Earl of Riverdale, he finds himself as fascinated by her as he was the first day they met, and wonders whether, after all these years, they have a chance at happiness together. Charles is determined to crack the hard exterior Matilda has built up for more than three decades, or he will risk losing her once again....

Mary Balogh has written more than one hundred historical novels and novellas, more than thirty of which have been New York Times bestsellers. They include the Bedwyn saga, the Simply quartet, the Huxtable quintet, the seven-part Survivors' Club series, and the Westcott series.

Praise for Mary Balogh and her novels

"Wistful yet hopeful, the story is a needed addition to a genre that usually celebrates the romances of younger protagonists."—Kirkus Reviews

“The balance between sweet and bitter produces a complex and winning love story.”—Publishers Weekly

“The sheer perfection of Balogh’s prose in the fifth superbly written installment in the Westcott series marries her rare gift for crafting realistically nuanced characters to produce another radiant Regency historical romance by one of the genre’s most resplendent writers.”—Booklist, starred review

“With tenderness, humor, and infinite finesse, Balogh turns the classic younger woman/older man pairing on its well-worn ear in another sigh-worthy [novel] that readers are sure to savor.”—Library Journal (starred review)

“The quiet, authentic intensity of the characters’ emotions is a hallmark of Balogh’s work, and it is a pleasure to experience each heart-wringing moment in this romance made for warming a winter night.”—BookPage

“A love story nearly perfect in every way.”—Booklist, starred review

“A story that is searing in its insight, as comforting as a hug, and a brilliant addition to this series. Another gem from a master of the art.”—Library Journal, starred review

“With her signature voice and steady pace, Balogh crafts a thoughtful, sweet Regency-era love story to follow Someone to Hold.”—Publishers Weekly

“Balogh’s delightful ugly duckling tale may be the nonpareil Regency romance of the season.”—Booklist, starred review