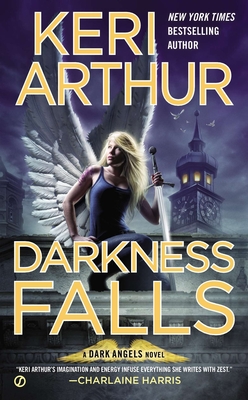 THE FINAL BOOK IN THE NEW YORK TIMES BESTSELLING SERIES BY “ONE OF THE BEST URBAN FANTASY AUTHORS IN PRINT TODAY.”—Darque Reviews

New York Times bestselling author Keri Arthur brings her Dark Angels series to a breathtaking conclusion as half-werewolf, half-Aedh Risa Jones treads a knife’s edge between the salvation of the human race and its total annihilation.

The search for the last key to the gates of hell has begun, and half-werewolf, half-Aedh Risa Jones is in more danger than ever—and one misstep could prove ruinous. It's only a matter of time before Madeleine Hunter, the dangerous head of the vampire council, begins her hunt for complete domination. And for Risa, that comes with an alarming ultimatum: hand over the last key to Hunter or, one by one, her loved ones will die.

Now, it’s a race against time for Risa to save those she loves, and to stop Hunter's apocalyptic plan to open the very gates of hell.

Keri Arthur, New York Times bestselling author of the Dark Angels and Riley Jenson Guardian series, has written more than thirty books. She’s been nominated in the Best Contemporary Paranormal category of the Romantic Times Reviewers’ Choice Awards and has won a Romantic Times Career Achievement Award for urban fantasy. She lives with her daughter in Melbourne, Australia.

“Keri Arthur’s imagination and energy infuse everything she writes with zest.” —Charlaine Harris

And the Dark Angels novels

“Plenty of action, suspense, danger and romance at every turn of the page.”—Urbany Fantasy Investigations

“The pace doesn’t seem to let up even for a second.”—The Book Swarm

“An absolute thrilling ride from start to finish!”—A Book Obsession

“Will have readers on the edge of their seat.”—Nocturne Reads

“You will fall hard for [Keri Arthur’s] Dark Angels series.”—CoffeeTimeRomance.com