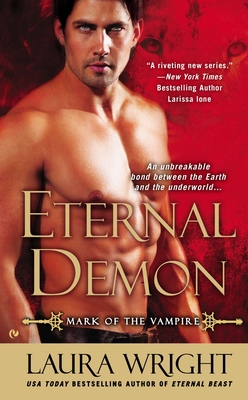 When Erion’s son is kidnapped by the evil vampire Cruen, Erion vows to stop at nothing to find his hideaway—including intercepting the traveling party of Cruen’s beautiful bride-to-be. But instead of a vulnerable caravan, Erion is met by a feral band of female demons that includes Hellen, the bride—a creature of dark magic and darker passion.

Though the safety of his son is foremost, Erion can’t deny his unexpected connection to Hellen—inflaming a manic desire as primal as it is irresistible. As their bond intensifies, they move toward an inevitable and terrifying battle. With time running out, Erion realizes he must not only find and rescue his son but protect Hellen from Cruen and the underworld forces waiting to destroy her for her betrayal.

Laura Wright is passionate about romantic fiction. Though she has spent most of her life immersed in acting, singing, and competitive ballroom dancing, when she found the world of writing and books and endless cups of coffee, she knew she was home.

Praise for the Mark of the Vampire Series