The Queene's Cure: An Elizabeth I Mystery (Mass Market) 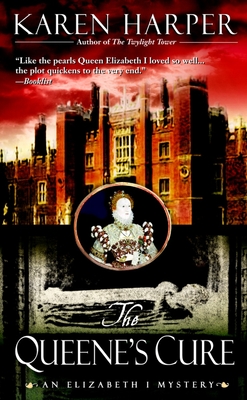 In late summer of 1562, with handsome Lord Robert Dudley by her side, Elizabeth Tudor leads her retinue to London’s Royal College of Physicians -- to demand its help in the raging battle against disease and pestilence. But the stalwart queen is shaken when a frighteningly lifelike effigy of herself ravaged by pox turns up in her royal coach.

Elizabeth’s fear that the counterfeit corpse is a harbinger of tragedy comes to fruition when ever more terrifying transgressions penetrate the very heart of her royal precincts. With the help of her Privy Plot Council , Elizabeth resolves to unmask a murderer who wears a false face and is beset by the vilest humours of the soul. But when she herself falls ill, an entire realm is caught in the grip of a treasonous conspiracy...as the indomitable young monarch fights for her life, her realm, and her rightful crown.

Karen Harper is the author of three previous Elizabeth I Mysteries: The Twylight Tower, The Tidal Poole, and The Poyson Garden, as well as a number of contemporary suspense and historical novels. She lives in Columbus, Ohio, and Naples, Florida.

“Strong writing coupled with rich details...and the suspense of a murder or two...You can’t get to the end of the book fast enough. Harper’s portrayal is most intriguing...transporting readers to a time many know little about.”
--The Columbus Dispatch

“A neatly plotted mystery with genuinely terrifying scenes at the climax.”
--Publishers Weekly

“Like the pearls Queen Elizabeth I loved so well...the plot quickens to the very end.”
--Booklist