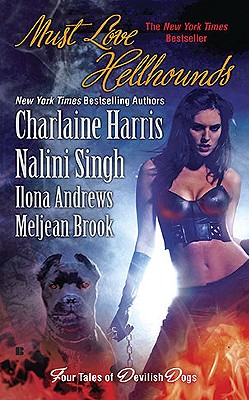 Follow paranormal bodyguards Clovache and Batanya into Lucifer’s realm, where they encounter his fearsome four-legged pets, in Charlaine Harris’s “The Britlingens Go to Hell.” Seek out a traitor in the midst of a guild of non-lethal vampire trackers, one that intends to eradicate the entire species of bloodsuckers, in Nalini Singh’s “Angels’ Judgment.” Find out why the giant three-headed dog that guards the gates of Hades has left the underworld for the real world—and whose scent he’s following—in Ilona Andrews’s “Magic Mourns.” Embark on a perilous search for the kidnapped niece of a powerful vampire alongside her blind—and damn sexy—companion and a hellhound in Meljean Brook’s “Blind Spot.”

Charlaine Harris is the #1 New York Times bestselling author of the Sookie Stackhouse and Midnight, Texas, fantasy/mystery series and the Aurora Teagarden, Harper Connelly, and Lily Bard mystery series. Her books have inspired HBO’s True Blood, NBC’s Midnight, Texas, and the Aurora Teagarden movies for Hallmark Movies & Mysteries. She has lived in the South her entire life.

Nalini Singh is the New York Times bestselling author of the Psy-Changeling and Guild Hunter series. Though she’s traveled as far afield as the deserts of China, the Highlands of Scotland, and the frozen landscapes of Antarctica, it is the journey of the imagination that fascinates her most. She lives and works in beautiful New Zealand.

Ilona Andrews is the pseudonym for a husband-and-wife writing team. Together they are the coauthors of the #1 New York Times bestselling Kate Daniels urban-fantasy series and the romantic urban-fantasy novels of the Edge. They currently reside in Texas with their two children and numerous pets.

Meljean Brook is the New York Times bestselling author of the Guardian paranormal romance and Iron Seas steampunk series. She lives in Oregon with her family.

“Just the ticket for the dog days of summer.”—Monsters and Critics