My Organic Life: How a Pioneering Chef Helped Shape the Way We Eat Today (Hardcover) 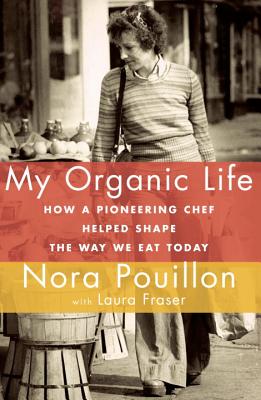 A wonderfully engaging memoir from the woman who founded America's first certified organic restaurant, My Organic Life is the story of an unheralded culinary pioneer who made it her mission to bring delicious, wholesome foods to the American table.
While growing up on a farm in the Austrian Alps and later in Vienna, Nora Pouillon was surrounded by fresh and delicious foods. So when she and her French husband moved to Washington, D.C., in the 1960s, she was horrified to discover a culinary culture dominated by hormone-bloated meat and unseasonal vegetables. The distance between good, healthy produce and what even the top restaurants were serving was vast, and Nora was determined to bridge that gap.
First as a cooking teacher, then as a restaurant owner, and eventually as the country's premier organic restaurateur, she charted a path that forever changed our relationship with what we eat. Since it opened in 1979, her eponymous restaurant has been a hot spot for reporters, celebrities, and politicians from Jimmy Carter to the Obamas alike. Along the way, Nora redefined what food could be, forging close relationships with local producers and launching initiatives to take the organic movement mainstream.
As much the story of America's postwar culinary history as it is a memoir, My Organic Life encompasses the birth of the farm-to-table movement, the proliferation of greenmarkets across the country, and the evolution of the chef into social advocate. Spanning the last forty years of our relationship with food, My Organic Lifeis the deeply personal, powerfully felt story of the organic revolution by the unlikely heroine at its forefront.

NORA POUILLON was born in Vienna and moved to the United States in the late 1960s. Shocked by the highly processed, preservative-laden foods Americans were eating, she embarked on a crusade to promote a healthier lifestyle, and developed an extensive network of organic and natural farmers in Virginia, West Virginia, and Pennsylvania. She opened Restaurant Nora in 1979 with her partners, brothers Thomas and Steven Damato, and worked with local farmers to supply seasonal organic produce. After years of careful sourcing, in 1999 Restaurant Nora became the first certified organic restaurant in the United States. Nora also initiated Washington, D.C. s first producer-only farmers market, FRESHFARM Markets, and she is the recipient of numerous awards, including the first Genesis Award from Women Chefs and Restaurateurs. An IACP Cookbook Awards finalist, Nora is a tireless advocate for nutritionally wholesome food and a sustainable, health-focused lifestyle based on the premise that you are what you eat, drink, and breathe."