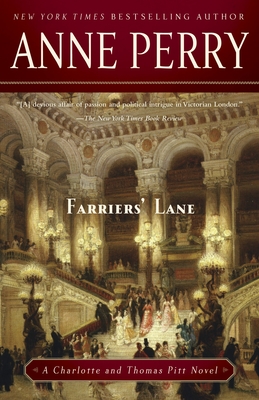 When the distinguished Mr. Justice Stafford dies of opium poisoning, his shocking demise resurrects one of the most sensational cases ever to inflame England: the murder five years before of Kingsley Blaine, whose body was found crucified in Farriers’ Lane. Amid the public hysteria for revenge, the police had arrested a Jewish actor who was soon condemned to hang. Police Inspector Thomas Pitt, investigating Stafford’s death, is drawn into the Farriers’ Lane murder as well, for it appears that Stafford may have been about to reopen the case. Pitt receives curiously little help from his colleagues on the force, but his wife, Charlotte, gleans from her social engagements startling insights into both cases. And slowly both Thomas and Charlotte begin to reach for the same sinister and deeply dangerous truth.

Anne Perry is the bestselling author of two acclaimed series set in Victorian England: the Charlotte and Thomas Pitt novels, including Death on Blackheath and Midnight at Marble Arch, and the William Monk novels, including Blood on the Water and Blind Justice. She is also the author of a series of five World War I novels, as well as twelve holiday novels, most recently A New York Christmas, and a historical novel, The Sheen on the Silk, set in the Ottoman Empire. Anne Perry lives in Los Angeles and Scotland.

“Gripping and intense . . . [Anne Perry’s] characters are authentically and appealingly drawn, and her plot is sinister.”—Booklist

“Riveting . . . [a] convincing look at the seamy side of Victorian life.”—Publishers Weekly

“When it comes to the Victorian mystery, Anne Perry has proved that nobody does it better.”—The San Diego Union-Tribune

“Perry is a forceful plotter and a consistently polished writer.”—Seattle Weekly