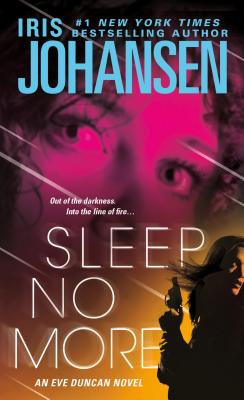 By Iris Johansen
Email or call for price.
Out of Print

From the #1 New York Times bestselling author Iris Johansen comes Sleep No More, the next thriller that will have Eve Duncan questioning everything she thought she knew about her family and her past
Forensic sculptor Eve Duncan knows what it's like to be haunted by the past. For years after her daughter Bonnie was stolen from her, she fought for closure. Now, as she strives to begin anew, she finds herself on another missing-persons case—one that is as mysterious as it is personal. A woman named Beth Avery, who has been locked away in a psychiatric facility for years, has vanished. And her connection to Eve is deeper than she can imagine.

As long-buried secrets about Beth are uncovered, Eve begins to realize how their lives are entwined—and how Beth's disappearance puts her in grave danger. Desperate, Eve enlists the help of profiler Kendra Michaels, whose uncanny ability to detect clues and solve puzzles leads her to the truth: That Beth escaped from the hospital—and the mind-altering drugs that held her prisoner for so long—and is on the run.

Soon, Eve begins to see the threads of a twisted plot within the powerful Avery family, one that threatens to destroy not only Beth but anyone else who might jeopardize the high-stakes game that is already in play. And time is running out…

“Johansen launches a trilogy that takes the reader on an action-packed journey filled with killers and heroes, leaving readers on tenterhooks.” —Booklist on Eve

“Gripping…Johansen deftly baits the hook for the next volume.” —Publishers Weekly on Eve

“The suspense and action will entertain all, even those new to the series.” —Library Journal (starred review) on Eve

“Johansen's stories keep getting better with each installment. You will find yourself drawn to Eve and caring about what happens to her.” —Night Owl Reviews (A Top Pick) on Eve

“A superb kick off ..an excellent presentation to this fantastic series that is a one sitting read.” —Reader to Reader Reviews on Eve

“Read Eve and be hooked.” —RT Book Reviews on Eve