Talk to Me: A Novel (Hardcover) 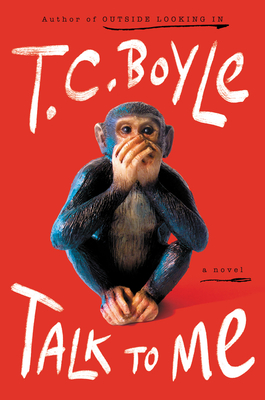 From bestselling and award-winning author T.C. Boyle, a lively, thought-provoking novel that asks us what it would be like if we could really talk to the animals

When animal behaviorist Guy Schermerhorn demonstrates on a TV game show that he has taught Sam, his juvenile chimp, to speak in sign language, Aimee Villard, an undergraduate at Guy's university, is so taken with the performance that she applies to become his assistant.  A romantic and intellectual attachment soon morphs into an interspecies love triangle that pushes hard at the boundaries of consciousness and the question of what we know and how we know it.

What if it were possible to speak to the members of another species—to converse with them, not just give commands or coach them but to really have an exchange of ideas and a meeting of minds? Did apes have God?  Did they have souls?  Did they know about death and redemption?  About prayer?  The economy, rockets, space?  Did they miss the jungle?  Did they even know what the jungle was?  Did they dream?  Make wishes?  Hope for the future?

These are some the questions T.C. Boyle asks in his wide-ranging and hilarious new novel Talk to Me, exploring  what it means to be human, to communicate with another, and to truly know another person—or animal…

T.C. Boyle is an American novelist and short-story writer. Since the mid-1970s, he has published eighteen novels and twelve collections of short stories. He won the PEN/Faulkner Award in 1988 for his third novel, World’s End, and the Prix Médicis étranger (France) in 1995 for The Tortilla Curtain. His novel Drop City was a finalist for the 2003 National Book Award. Most recently, he has been the recipient of the Mark Twain American Voice in Literature Award, the Henry David Thoreau Prize, and the Jonathan Swift Prize for satire. He is a Distinguished Professor of English Emeritus at the University of Southern California and lives in Santa Barbara.

“The novel is one of Boyle’s recent best…the virtuoso…[Boyle’s] masterly storytelling and shrewd social commentary have much in common with Charles Dickens; his laid-back, colloquial prose is maximalist rather than minimalist, with a touch of acute satire...If you’re willing to suspend your disbelief about anthropomorphism, you’ll enjoy this gripping and inescapably bittersweet book.” — Boston Globe

"Talk to Me—told alternately from the point of view of the human and chimp characters—finds a sensitive issue and dives deep into an exploration that locks on and won’t let go. . . . Against a backdrop of lurid news stories of chimps living with humans, where things go horribly wrong, this novel makes a visceral kind of sense and raises uncomfortable issues of human relationships with other species. Highly recommended." — Library Journal (starred review)

“ If the measure of a good story is how often you think about it after you are done, then Talk to Me . . . hits the mark. . . . Talk to Me feels real and relevant ” — BookTrib

“Boyle eloquently lays out the philosophical and ethical debates of raising chimps in a human household…Boyle poignantly exposes our anthropocentric biases while exploring the nature of consciousness and reminds us of the adage about the most dangerous species in the zoo being the humans.” — Booklist