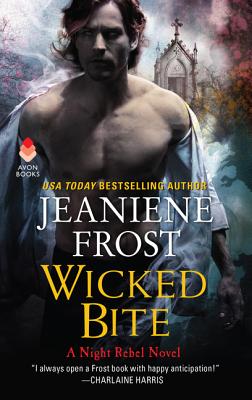 Some promises are meant to be broken…

Veritas spent most of her life as a vampire Law Guardian. Now, she’s about to break every rule by secretly hunting down the dark souls that were freed in order to save Ian. But the risks are high. For if she gets caught, she could lose her job. And catching the sinister creatures might cost Veritas her own life.

Some vows are forever…

Ian’s memories might be fragmented, but this master vampire isn’t about to be left behind by the woman who entranced him, bound herself to him, and then disappeared. So what if demons, other Law Guardians, and dangerous, otherworldly forces stand against them? Come hell or high water, Ian intends to remind Veritas of the burning passion between them, because she is the only person seared on his mind—and his soul…

Jeaniene Frost is the New York Times, USA Today, and international bestselling author of the Night Huntress series and the Night Huntress World novels. To date, foreign rights for her novels have sold to nineteen different countries. Jeaniene lives in North Carolina with her husband Matthew, who long ago accepted that she rarely cooks and always sleeps in on the weekends. Aside from writing, Jeaniene enjoys reading, poetry, watching movies with her husband, exploring old cemeteries, spelunking and traveling—by car. Airplanes, children, and cookbooks frighten her.

"Frost's second Night Rebel title is a fierce and satisfying sequel, brilliantly fleshing out two vibrant characters in ways that feature their surface power and irreverent attitudes but also spotlight the internal courage and nobility which make them perfect for each other. The hurtling plot and outstanding worldbuilding frame a poignant, character-driven romance that explores unconditional love and self-acceptance... A breathtaking paranormal romance."
— Kirkus Reviews (starred review)

"Frost’s utterly enjoyable second Night Rebel novel delivers all the sizzle, sass, and suspense that make this paranormal world such a thrill... Amid fierce battles of wits, weapons, and magic, Frost highlights her characters’ courage, growing self-acceptance, and unshakable love for one another... This pulse-quickening romance succeeds on every level."
— Publishers Weekly (starred review)