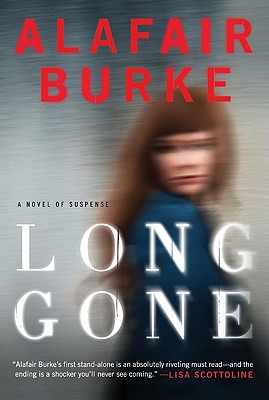 “Long Gone is a tremendous novel, and Alafair Burke is one of the finest young crime writers working today.”
--Dennis Lehane, author of Moonlight Mile

Echoing the intensity of Harlan Coben’s Tell No One and the psychological depth of Laura Lippman’s What the Dead Know, Alafair Burke’s first stand-alone novel catapults her into the top ranks of modern suspense. In New York City’s cut-throat world of art, appearances can be deceiving—especially when art world newcomer Alice Humphrey becomes a suspect in a gruesome murder at a Chelsea gallery, and is thrown into a treacherous labyrinth of intrigue, crime, and conspiracy. Now, Alice must discover the truth behind the murder before the unsolved mystery claims her as its next victim.

Alafair Burke is a New York Times bestselling author whose most recent novels include The Wife and The Ex, which was nominated for the Edgar Award for best novel. She also co-authors the bestselling Under Suspicion series with Mary Higgins Clark. A former prosecutor, she now teaches criminal law and lives in Manhattan and East Hampton.

“Blistering…. As carefully plotted as a surgeon’s heart transplant…. [Burke] writes with style, class and precision; just try to guess the identity of the killer here. A-”
— Les Roberts, Cleveland Plain Dealer

“Alafair Burke’s first standalone is an absolutely riveting must read—and the ending is a shocker you’ll never see coming.”
— Lisa Scottoline, New York Times-bestselling author of Save Me

“Long Gone is a red-hot firecracker of a thriller with all the right stuff-perfect pacing, plotting, and suspense. If you already love Alafair Burke’s novels, buckle up for her best book ever. If you haven’t read her yet, the time is now.”
— Lisa Unger, New York Times-bestselling author of Darkness My Old Friend

“Alafair Burke understands the criminal mind. Long Gone is both an education and an entertainment of the first order. This is a very clever and very smart novel by a very clever and smart writer. The dialogue crackles, the plot is intriguing, and the pacing is perfect.”
— Nelson DeMille, New York Times-bestselling author of The Lion

“Addictive…. Alafair Burke delivers her best book to date with her first stand-alone thriller…. A masterful read. Humphrey is an everywoman, and readers will care about what happens to her…. Compelling.”
— Jeff Ayers, Associated Press

“Long Gone is the type of book that should come with a warning. It’s a compulsively readable, highly addictive story. The ending will leave you breathless.”
— Karin Slaughter, New York Times-bestselling author of Fallen

“Burke’s first stand-alone novel is a chilling psychological thriller which weaves disparate characters together in a web of revenge, deceit and betrayal. This clever, twisting plot serves up numerous victims and numerous criminals—plus police who can’t be bothered with the truth.”
— Romantic Times (4 ½ Stars)

“Sensational…. Exciting…. Alice is a compelling heroine and the nightmare she finds herself dropped into is scary believable.”
— Carole E. Barrowman, Milwaukee Journal Sentinel