The Arrivals: A Novel (Paperback) 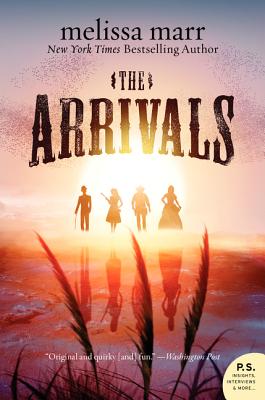 The Arrivals is the second novel for adults by internationally bestselling author Melissa Marr.

Chloe walks into a bar and blows five years of sobriety. When she wakes, she finds herself in an unfamiliar world, The Wasteland. She discovers people from all times and places have also arrived there: Kitty and Jack, a brother and sister from the Wild West; Edgar, a prohibition bootlegger; Francis, a one-time hippie; Melody, a mentally unbalanced 1950s housewife; and Hector, a former carnival artist.

None know why they arrived there—or if there is way out of a world populated by monsters and filled with corruption.

Just as she did in Graveminder, Marr has created a vivid fantasy world that will enthrall. Melissa Marr’s The Arrivals is a thoroughly original and wildly imagined tale about making choices in a life where death is unpredictable and often temporary.

The book includes a P.S. section with extra material from the author and a bonus story exclusive to this paperback edition.

Melissa Marr is the New York Times bestselling author of the Wicked Lovely series as well as the adult fantasy novels Graveminder and The Arrivals. When not traveling, Melissa can be found in Phoenix or online at www.melissamarrbooks.com.

“Marr imbues [The Wasteland] with an unconventional spirit that makes everyone—displaced humans, demons, deluded villain, scary critters (some bound to their own elaborate codes of ethics), and frustrated locals—vivid and surprising.” — Locus

“You’ll want to definitely saddle up for this one.” — USA Today