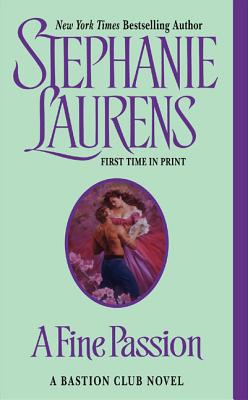 The men of the Bastion Club are powerful, loyal, and not averse to overcoming danger if they must. Now, after years of loyal service to the Crown, they each -- one by one -- must face that greatest danger of all ...love.

The last of his line, Jack, Baron Warnefleet, has fled London after nearly being compromised into marrying a dreadful female. Turning his back on the entire notion of marriage, he rides home to the estate he has not seen for years, determined to set in motion an alternative course of action.

But then in the lane before his gate, Jack rescues a startlingly beautiful lady from a menacing, unmanageable horse. However, while he begins by taking command, the lady continues by taking it back. Lady Clarice Altwood is no meek and mild miss. She is the very antithesis of thewoolly-headed young ladies Jack has rejected as not for him. Clarice is delectably attractive, beyond eligible, undeniably capable, and completely unforgettable. Why on earth is she rusticating in the country?

That enigma is compounded by mystery, and it's quickly clear thatClarice is in danger. Jack must use every ounce of his cunning and wit to protect this highly independent and richly passionate woman ... who has so quickly stolen his heart.

#1 New York Times bestselling author Stephanie Laurens began writing as an escape from the dry world of professional science, a hobby that quickly became a career. Her novels set in Regency England have captivated readers around the globe, making her one of the romance world's most beloved and popular authors.